SINGAPORE (The Straits Times/ANN): A Singaporean student from a top university in Britain admitted on Thursday (July 29) to filming multiple women at places including local toilets.

The clips he recorded involved 11 identified women and one unknown victim.

The offender, who is now 23, pleaded guilty in a Singapore district court to seven counts of insulting a woman’s modesty and an offence under the Films Act.

The man, who cannot be named due to a gag order, started his studies at the university in 2018.

Before that, he targeted his first victim, then 18, in the wee hours on Dec 2, 2015, by placing a recording device in a hotel room toilet to record a video of her showering.

Some time in early 2016, the principal of the victim’s junior college told her the clip had been circulating online. The police were alerted. The woman said in her victim impact statement that she felt betrayed.

Deputy Public Prosecutor Tan Zhi Hao said: “She has turned down many social activities that involve staying at birthday parties at hotels and chalets in fear that she would have to use a public toilet. She has self-esteem issues and feels ‘very unworthy’.”

The offender continued targeting more women after this. Among other places, he installed a recording device in a toilet at his Singapore home and filmed some of his victims.

He also took an upskirt video of a 20-year-old woman while she was on an escalator.

The court heard that two of the videos he recorded were circulated online.

After receiving multiple reports between early 2016 and June 2019, officers from the Singapore Police Force identified the man as the main suspect following preliminary investigations.

They raided his home on July 3, 2019, and seized seven of his personal devices. Forensic analysis uncovered 16 offending videos and 124 upskirt photographs in the devices.

The offender had recorded the two videos that were circulated online and the other 16 found in his devices. Fourteen of the 18 videos were taken at his home.

He later came clean to the police about what he had done. DPP Tan said: “In total, he estimated that the number of voyeuristic videos he had filmed was ‘maybe three digits’.

“He would commit the offences when he felt stressed from school or work. He felt that filming the victims ‘was an addiction’ to him.”

After the man was convicted on Thursday, DPP Foo Shi Hao applied to the court for the gag order on his identity to be lifted, noting that the victims were unanimous in supporting the move.

“There is undeniable public interest in identifying the accused. He should not be allowed to hide behind the gag order,” said DPP Foo.

“Both retribution and deterrence can only be given full weight if the accused is identified and publicly held responsible for the crimes that he has committed.”

The gag order had been issued earlier to protect the women, who could be identified if the man is named. The order also does not allow the university to be named as doing so could lead to his identity.

The man is represented by lawyers Kalidass Murugaiyan and Ashvin Hariharan.

Urging the court to reject the application, Ashvin pointed out that the prosecution had been unsuccessful in making a similar application previously.

When District Judge Tan Jen Tse ruled that the gag order be lifted, the defence said they may raise the matter to the High Court. In the meantime, the gag order remains.

Judge Tan called for a report to assess the offender’s suitability for probation. He is expected to be sentenced on Aug 26.

For each charge of insulting a woman’s modesty, an offender can be jailed for up to a year and fined. - The Straits Times/Asia News Network 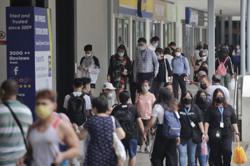