US Defence Secretary Lloyd J. Austin along with Singapore Defence Minister Ng Eng Hen, back, review an honor guard at the Ministry of Defence on Tuesday, July 27, 2021 in Singapore. Austin decried the actions of Myanmar's military rulers as unacceptable on Tuesday, while urging a regional bloc to keep demanding an end to violence. Austin also applauded the Association of Southeast Asian nations for its efforts on the issue, which included forging a consensus with Myanmar’s military leader in April. - AP

Austin's broadside came at the start of his first trip to South-East Asia as US defence secretary, as he seeks to rally allies in the region as a bulwark to China.

President Joe Biden's administration wants to reset relations with Asian countries and build alliances to face Beijing, after the turbulence and unpredictability of the Donald Trump era.

"Beijing's claim to the vast majority of the South China Sea has no basis in international law," he said in a speech hosted by the International Institute for Strategic Studies think tank.

"That assertion treads on the sovereignty of the states in the region," he said, adding that the US would support countries in defending their rights.

China claims almost all of the resource-rich sea, through which trillions of dollars in shipping trade passes annually, with competing claims from Brunei, Malaysia, the Philippines, Taiwan and Vietnam.

Beijing has been accused of deploying a range of military hardware including anti-ship missiles and surface-to-air missiles there, and ignored a 2016 international tribunal decision that declared its historical claim over most of the waters to be without basis.

Tensions have escalated in recent months between Beijing and rival claimants.

Manila was angered after hundreds of Chinese boats were spotted inside the Philippines' Exclusive Economic Zone, while Malaysia scrambled fighter jets to intercept Chinese military aircraft that appeared off its coast. 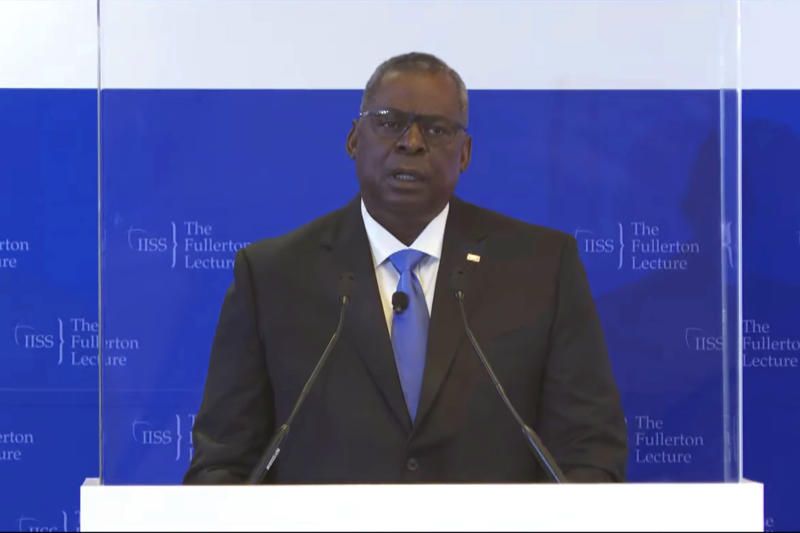 Austin deliversing a speech during the 40th IISS Fullerton Lecture on Tuesday, July 27, 2021 in Singapore. - AP

Austin said Tuesday that the US "will not flinch when our interests are threatened" -- but he insisted Washington does "not seek confrontation" with China.

"I am committed to pursuing a constructive, stable relationship with China, including stronger crisis communications with the People's Liberation Army."

The US-China relationship has deteriorated over a range of issues from cybersecurity and tech supremacy to human rights in Hong Kong and Xinjiang.

Biden has largely kept the hawkish stance on China of Donald Trump, describing the Asian power as the pre-eminent challenge to the United States, but has lowered the temperature and instead emphasised working with allies and working at home to compete better.

After Singapore, Austin will visit Vietnam and the Philippines, and will seek to underline that the US is a "stabilising force" in Southeast Asia, said a senior defence official.

A booming region home to more than 650 million people, South-East Asia has become a key battleground for influence between the US and China.

And as the region faces its most serious coronavirus outbreak yet, Washington and Beijing have been competing to donate vaccines.

Austin played up the US contribution, saying Washington was "rushing life-saving vaccine doses to the region", and listed several Southeast Asian countries that had received jabs.

"They are free. No conditions, no small print -- and no strings attached."

China has also been donating its homegrown jabs to hard-hit South-East Asian countries -- although analysts have suggested Beijing is hoping to use its "vaccine diplomacy" to extend its clout.

Austin's visit is the latest by a senior US official to Asia.

US Secretary of State Antony Blinken is arriving in India Tuesday, where he will speak about supporting Afghanistan as worries grow in New Delhi about Taliban gains as US-led foreign forces withdraw.

And Deputy Secretary of State Wendy Sherman visited China this week, holding talks with top officials as Washington seeks to find some common ground with the Asian giant. - Reuters