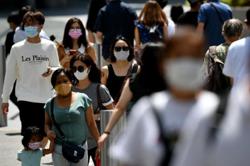 Peter Ben Embarek of the World Health Organization team holds up a chart showing pathways of transmission of the virus during a joint news conference at the end of the WHO mission in Wuhan in central China's Hubei province. - AP

In the letter they urged that science, not speculation, is essential to determine how the virus that triggered the Covid-19 pandemic reached humans, reiterating that the virus most likely originated in nature and not in a laboratory and they refuted the US-led "lab-leak" theory that put some prominent epidemiologists into a difficult situation.

Such a brave and clear way of refuting rumours, targeted bashing, disinformation and conspiracy out of political purposes is very much needed, which was welcomed by scientists, officials and the public.

Twenty-four scientists around the world including Peter Daszak, a member of the WHO-led team studying the coronavirus's origins, said in the letter that besides reaffirming solidarity with those in China who confronted the outbreak, they wanted to express their view on the most likely scenario that the SARS-CoV-2 originated in nature, not in a laboratory - a conclusion drawn on the basis of genetic analysis of the new virus and well-established evidence from the previous emerging infectious diseases.

"We believe the strongest clue from new, credible, and peer-reviewed evidence in the scientific literature is that the virus evolved in nature, while suggestions of a laboratory-leak source of the pandemic remain without scientifically validated evidence that directly supports it in peer-reviewed scientific journals, " said the open letter, which was also seen as a highly courageous move in refuting the growing conspiracies concerning the origins of the virus considered as a coordinated political campaign led by anti-China hawks from former Trump administration officials like Mike Pompeo.

The right-wing press has been contacting authors, one by one and repeatedly, throughout the last six months, pushing them to state whether they would change their stance.

For example, the Daily Mail has published pictures of all the scientists who had signed the letter and said that some of the scientists changed their stance by believing in the 'lab-leak' theory, a source close to the open letter in The Lancet told the Global Times on Wednesday (July 7).

The source said that they line up pictures and go through each person because they're targeting scientists individually.

This is the same strategy the right-wing press used for attacks on climate change scientists - revealing private emails by freedom of information act requests, then attacking them in the press.

"This re-confirmation from almost all of the authors shows there is still strong support for scientists in China and around the world working on Covid-19 and that personal attacks will not change the facts of the issue - there is no evidence of a lab leak, but mounting evidence that the virus spilled over from wildlife in the same way SARS did, " the source said, noting that it also calls for continued scientific collaboration with China to learn about the origins, rather than politically motivated attacks.

Prominent US and Australian scientists focused on tracing the Covid-19 origins are now facing tremendous political pressure, and some have been sidelined for not yielding to politicians-driven conspiracy theories on the matter and they received anonymous threats, the Global Times recently learned from people with knowledge of the matter.

Since the Biden administration ordered in May the US intelligence agencies to report on Covid-19 origins within 90 days, several US scientists had been put at the center of the political storm, who have also been suppressed by the Republicans and extremists.

Science works best in an environment of trust and respect, which permits objective and transparent collaboration, Gerald Keusch, professor of medicine and international health at Boston University Schools of Medicine and Public Health and who signed the open letter, told the Global Times on Wednesday via email.

"Until that is fully restored the next-phase scientific investigations the entire world so desperately needs will be more difficult to establish. The longer this takes, the more difficult will be the task, " he said.

The Washington Post said in an article in May that the "lab-leak" theory jumps from "mocked to maybe" as Biden ordered an intelligence review, as the hypothesis has been ridiculed by scientists as a baseless conspiracy theory fueled by Trump in order to shift the blame as the US government's failed response to the pandemic had triggered public outrage.

Some analysis suggested that the Biden administration appeared to be responding to political pressure when he decided to renewe the conspiracy from his predecessor.

However, intelligence collected showed that the majority leaned toward the natural origins scenario, but some were inclined to the "lab-leak" theory, on which Biden described as "low or moderate confidence" in their conclusions, while other branches of intelligence did not have enough evidence, the Financial Times reported in May.

And this has also sparked concern that the 90-day investigation on the matter ordered by Biden is not long sufficient to reach any solid conclusion.

"I admire Western scientists who dare to speak out even in such a dire environment. I believe the Lancet and other scientific publications should give them a greater chance to voice their suggestions, " Zeng Guang, a former chief epidemiologist at the Chinese Center for Disease Control and Prevention, told the Global Times on Wednesday.

The most ridiculous thing that the Biden administration has put forward is asking intelligence groups to investigate the issue, Zeng said, noting that it backed off as the Biden administration announced that US intelligence officials are cautioning that a 90-day review into the origins of the Covid-19 virus may not produce a definitive explanation.

"I believe the Biden administration knows that the Wuhan 'lab-leak' theory could not be proved as it is not true at all. They are sticking to the hypothesis just to throw mud at China, and divert public attention to China to cover their bungling of the pandemic, " he said.

A source close to the matter told the Global Times earlier that some scientists are being threatened by emails, phone calls and messages on social media, and in the US, people who attacked them generally have far-right and even white supremacist leanings. The GOP members of Congress are whipping those extremists up.

"There is a coordinated political campaign to undermine anyone involved in the origins-tracing work if they do not fit the 'lab-leak' narrative. This is coming mainly from the right wing circles in the US, Australia, and in Europe, mainly the UK, " the source said.

However, there were courageous scientists around the world who joined to write this open letter to fight such a political maneuver.

"All of us, and so many colleagues who were not part of the original correspondence and the current update believe that high quality expert global collaboration among scientists who know and trust one another is essential to trace the pathway from bats to people, " Keusch said.

Jeremy Farrar, director of Wellcom, a global charitable foundation which supports science to solve urgent health challenges, and the co-author of the letter on the Lancet, was quoted as saying in an email the foundation sent to the Global Times on Wednesday that "in my view, the most likely scenario is that the virus crossed from animals to humans and then evolved in humans. The best scientific evidence available to date points to this."

It is most likely it crossed the species barrier to infect and then adapt to humans at some point in 2019, but there are other possibilities which cannot be completely ruled out and retaining an open mind is critical, Farrar said, noting that there is no place for unsubstantiated rumors, or conspiracy theories often fueled for other purposes.

"The general trend of the international community to respect science and uphold justice will remain unchanged, " Wang Wenbin, a spokesperson of the Chinese Foreign Ministry, told a press conference on Wednesday, in response to a question about the open letter.

The authoritative conclusion of the WHO-China joint expert group will not change, and work on Covid-19 virus origins should be based on a global perspective and not limited to a certain region, Wang stressed.

A joint WHO-China report on tracing the origins of coronavirus was released in March, which still leaves the question of the virus origins unanswered.

The report, generated after WHO experts visited Wuhan, the Chinese city first reporting a Covid-19 case, dismissed the "lab-leak" conspiracy theory, and recommended transmissions between animals and humans, and transmissions through frozen food.

We continue to assess all of the sequence information about the virus and its origins, which remains overwhelmingly convincing of the origins over decades in nature, from bats to people, probably with intermediate mammalian hosts, although those remain uncertain, Keusch noted.

"That is the problem now. If we don't know how it reached humans it is not possible to target the response to be sure this will not happen again, " he said.

Since the outbreak of the Covid-19 pandemic, the research results of Chinese medical and scientific professionals have been published in international journals, including the Lancet, many times, providing valuable references for researchers around the world to better understand the virus and the symptoms of the deadly disease.

Judging from the pattern of coronavirus transmission, we can see that the virus grows from less transmissible to more transmissible, and at that time in Wuhan, the virus became very infectious that it soon caused cluster infections, Zeng noted.

"Then we have to look back, where it was hiding when it is less transmissible? Would it be possible that it hid in countries where earlier cases than Wuhan had been reported, such as Italy, Spain and the US? Should those countries, too, be subjected to the WHO virus origins probe?" Zeng asked. - Global Times