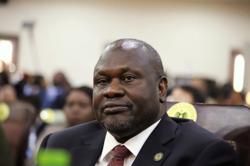 He left Viet Nam for the United Nations’ peacekeeping mission in April and has been busy with the treatment and COovid-19 prevention and control work.

Chien is among 63 Vietnamese officers who are working at Việt Nam’s Level-2 Field Hospital Rotation 3 (L2FH3) in Bentiu, South Sudan, an oil hub with unpredictable security risks and ethnic tensions.

"Yet we were carefully trained with professional knowledge and skills before the departure so we have been operating the hospital smoothly. The hospital rotation 2 had already had preventive procedures and set up an isolation area. We just had to follow and add on our experience to run the hospital according to the current situation."

Among more than 100 patients that the hospital Rotation 3 has received, nearly 30 were suspected Covid-19 cases. Mild cases were instructed to isolate themselves at their units or at the level-1 hospital while serious and critical cases were treated at the level-2 hospital.

Most of them were found to be contacts of previously confirmed cases or linked to the clusters of infections in the localities.

The ministry also said on Monday that three more Covid-19 patients with severe underlying conditions died most recently in the country, and that the total number of COVID-19 related deaths has risen to 69.

Nationwide, the number of recovered Covid-19 patients has risen to 5, 453, up 224 from Sunday, and over 172, 700 people are being quarantined and monitored currently in the Southeast Asian country.

As of Monday, Vietnam has registered a total of 11, 780 domestically transmitted Covid-19 cases, including 10, 210 detected since the start of the latest outbreak in late April, according to the health ministry. - Xinhua