The woman received the first dose of the Pfizer-BioNTech vaccine on June 3, 2021. - THe Straits Times/ANN

SINGAPORE, June 20 (The Straits Times/ANN): The Ministry of Health (MOH) has said that there was no indication that a 72-year-old woman who died a day after she received her first Covid-19 jab had had an allergic reaction to the vaccine.

It was responding on Saturday (June 19) to media queries about a Facebook post by Andrew Tan, who questioned if his mother's death could have been caused by the vaccine.

Madam Doreen Chan received the first dose of the Pfizer-BioNTech vaccine on June 3, and "everything seemed fine except for a sore arm", said Tan in his post that had gone viral.

But she collapsed on June 4 at around 7.15pm and was taken by ambulance to the emergency department of Sengkang General Hospital, where she died at around 9pm.

The MOH said it was alerted by the hospital about Madam Chan's death on June 4.

Sengkang General Hospital, meanwhile, said in a statement to the media that Madam Chan had been taken to the hospital at 8.39pm on June 4, and the emergency department team had tried to resuscitate her immediately, but "unfortunately, despite our best efforts, the patient passed on".

"As cause of death could not be ascertained, this case was referred to the coroner for further investigation. The coroner has established the cause of death as ischaemic heart disease," said the hospital.

The MOH said that Madam Chan had been assessed by trained healthcare personnel to be suitable for Covid-19 vaccination, and had also been observed for about 30 minutes after she received the jab, in line with vaccination protocols.

The ministry said: “The case was referred to the coroner, who conducted an autopsy and determined that the cause of death was ischaemic heart disease (heart attack). This is the term given to heart problems caused by narrowed heart arteries.

“The autopsy found longstanding blockage of the blood vessels supplying blood to the heart muscles, which could not have been caused by vaccination. There was also no indication of an allergic reaction to the vaccine.”

Sengkang General Hospital said it has contacted Madam Chan's family and would be providing more details about its findings on what happened.

Tan, the chief executive of local diaper company Pee-Ka-Poo, said a police investigation officer had asked him and his family about foul play and his mother's pre-existing conditions after her death.

But he questioned if the focus should instead have been on the vaccination, since his mother had just received her jab a day before she died.

He had raised this to the police officer, he said. He added in his Facebook post: "Thankfully, I'm glad that the points I raised in the report led to the coroner doing the autopsy."

When the death certificate was issued, Madam Chan's cause of death stated ischaemic heart disease, or heart attack.

Tan said he had asked the counter staff if it might have been the vaccine, but was told that the answer could only be "answered by the pathologist".

He then called the investigation officer, who promised to submit an application for an inquiry into Madam Chan's death. The police officer also told Mr Tan that he would need to be prepared to wait because inquiries related to Covid-19 currently have "a four-month waiting line".

"Even though the anomaly was the vaccine, I knew I was not going to get my answer. I was already without sleep for 36 hours and I really needed to go settle funeral arrangements. Reluctantly, I left," he said, of not getting his answer at the counter where he collected his mother's death certificate.

He said that after his mother's death, he learnt about similar incidents in which people had died or suffered permanent disability shortly after receiving the Covid-19 vaccination, and wondered if there was a pattern.

"But here's the thing I'm asking now: Is it possible that (Covid-19) vaccine related injuries or deaths are classified as something else right now?" he added.

He called for those who had similar experiences to contact him and said that he hoped to drum up awareness about deaths, suggesting that more should be done to investigate them.

He also said that he was not advocating that people should not get vaccinated, and said he was fully vaccinated with the Pfizer vaccine.

"I belong to the majority that's got no major side effects. My side effects include sneezing and coughing more. Unfortunately, there is a possibility that my mum could be the minority and if it's true, I hope that the untold truths about the vaccine can come to light. For the safety of mankind," he said.

Meanwhile, Sengkang General Hospital said it was aware of the Facebook post and had contacted Madam Chan's family to offer them assistance.

The Straits Times has contacted Mr Tan on Facebook for comments. 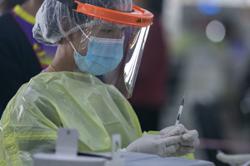 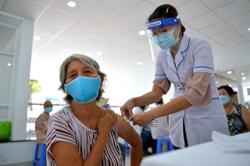