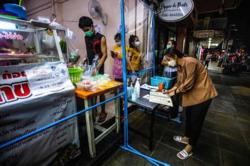 BANGKOK, June 18 (The Nation Thailand/ANN): Two million doses of Sinovac and one million doses of Sinopharm vaccines will be arriving in Thailand this month, Prime Minister Prayut Chan-O-Cha announced on Friday while presiding over the daily meeting with the Centre for Covid-19 Situation Administration.

Prayut said he had confirmed the delivery with China’s charge d’affaires Yang Xin.

Separately, government spokesperson Anucha Burapachaisri explained that Prayut’s promise on Wednesday to reopen the country in 120 days should not be seen as a countdown. He said the aim was to open the country to foreign tourists gradually.

“Hence government officials nationwide must prepare for the reopening, ” he said.

Meanwhile, Prayut (pic, below) and his close aides will be heading to Phuket on June 25 to check on sandbox preparations. Meanwhile, 4, 094 patients have recovered and been discharged in the last 24 hours.