COP26: Do more for climate

No plastics: Environmental activists demonstrating during an Earth Day rally in Surabaya in April. Indonesian officials have recently mulled over a net-zero emissions target by 2070. — AFP

FIVE months ahead of the annual climate summit, Indonesia is being urged to declare a more ambitious pledge in order to prevent catastrophic impacts from the climate crisis.

United Kingdom Business Secretary Alok Sharma, who also serves as the president of COP26, visited Indonesia from Sunday to Tuesday as part of his global tour to urge governments around the world to be more ambitious in efforts to mitigate the climate crisis in the run-up to the climate summit.

Hosted in partnership between the UK and Italy, the summit is slated to take place in the Scottish city of Glasgow in November, a year later than planned due to delays caused by the Covid-19 pandemic.

One of the objectives of the tour is to achieve more ambitious net-zero emissions targets and nationally determined contributions (NDCs), or emissions-reduction pledges, from signatories of the Paris Climate Agreement, including Indonesia.

“I know the government here (in Indonesia) is obviously doing a lot of work.

“I hope the government will be able to come forward with any revised plans and targets than they had before COP26, ” Sharma said.

Countries that have signed the Paris Agreement in 2015 agree to limit warming to below 1.5°C to 2°C to prevent catastrophic impacts from the climate crisis.

The latest studies suggest that countries will need to reach a net-zero target for all greenhouse gases by 2068 to limit warming below the agreed threshold.

According to the World Resources Institute net-zero emissions, or climate neutrality, is the point when human-caused greenhouse gas emissions are balanced by removing the gasses from the atmosphere.

This process usually takes place after countries reduce their emissions to as close to zero as possible.

Recently, Indonesian officials stated the government was mulling setting a net-zero emissions target by 2070 – two years later than the deadline suggested by the studies.

The government also decided to keep its previous pledge to reduce emissions by 29% independently, or 41% with international assistance, by 2030.

According to the United Nations Framework Convention on Climate Change (UNFCCC), 29 countries had committed their long-term emission reduction strategies as of Thursday.

Most of the countries set a net-zero emissions target by 2050.

Many had hoped President Joko “Jokowi” Widodo would announce a more ambitious target during a virtual climate summit hosted by US President Joe Biden in April.

But Jokowi failed to do so although he reiterated Indonesia’s commitment to “tackling climate change and (calling) upon the world to take concrete actions”.

Sharma went on to say that an ambitious net-zero target would encourage all parties to work on mitigating the climate crisis by, among other measures, pushing a transition to clean and renewable energy. — The Jakarta Post/ANN 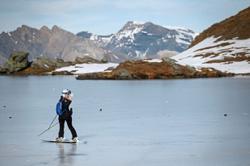