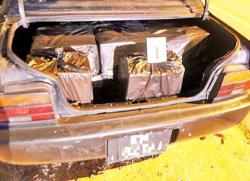 BANDAR SERI BEGAWAN, May 31 (Borneo Bulletin/ANN): Authorities seized a number of contraband items during a joint prevention patrol in the Temburong District on Saturday, with the participation of Company C Police Reserve Unit of the Operations Department under the Royal Brunei Police Force (RBPF) and the Royal Brunei Armed Forces (RBAF).

The RBPF said that the items – comprising 150 bottles of alcohol, six cartons of cigarettes, five sacks of rice and raw chicken parts – were recovered from a suspicious vehicle in the vicinity of Kampong Leong Baru.

The vehicle was found unlocked and parked in a secluded area, with the driver missing.

The contraband items were discovered in black plastic bags placed on the back seats and inside the boot, during a further search by Bangar Police Station personnel.

The case was handed over to the Royal Customs and Excise Department (RCED) for follow-up action.

The RBPF is stepping up measures against cross-border criminal activities through joint partnership with other local enforcement agencies.

The public can assist by providing information on suspicious or illegal activities. 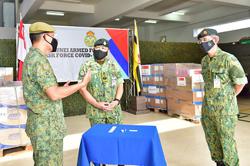 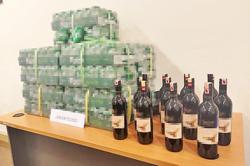