SINGAPORE, May 25, The Straits Times/ANN - Veteran actor Terence Cao Guohui has admitted that he unlawfully hosted 12 guests at his home amid the Covid-19 outbreak last October and was fined $3,500 on Tuesday (May 25).

Cao, 53, pleaded guilty to an offence under the Covid-19 (Temporary Measures) Act after hosting the party at his condominium apartment in Daisy Road, off Braddell Road.

The Singaporean had breached phase two regulations that restricted social gatherings to no more than five people.

He is the last person involved in this case to be convicted in court.

One of the guests, former magazine editor Lance Lim Chee Keong, 50, who had invited four people to the gathering, was fined $3,000 last week over an offence under the same Act.

The court heard that Cao had initially organised a gathering at his home for himself and five others last October.

Eleven of those in the gathering had earlier been fined $300 in lieu of being prosecuted due to their lower level of culpability.

The celebrities have since apologised via Mediacorp, saying they "deeply regret" their actions.

Pow, on the other hand, was handed an unrelated drink-driving charge last month, and Mediacorp has since terminated his contract. His case involving this charge is pending.

On Tuesday, Deputy Public Prosecutor Norman Yew urged the court to sentence Cao to a fine of $3,500 - $500 more than Lim’s - to reflect the actor’s “increased culpability” as he was the host of the party.

Defence lawyer S.S. Dhillon, however, pleaded for a lighter fine and added that it would have been “ethically wrong” for Cao to turn the guests away from his birthday celebration.

Cao could not tell his guests to “get out of here”, said the lawyer.

First-time offenders who breach laws under the Covid-19 (Temporary Measures) Act can be jailed for up to six months and fined up to $10,000. 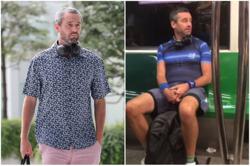