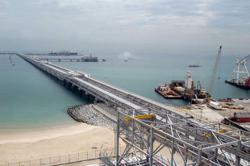 Capital expenditure, including manufacturing, was down 1.4 per cent. - Bloomberg

TOKYO (AFP): Japan's economy contracted 1.3 per cent in the three months to March after the government reimposed coronavirus restrictions in major cities as infections surged, data showed Tuesday (May 18).

The quarter-on-quarter fall came after the world's third-largest economy grew for two quarters to December, but the expansion was stopped in its tracks by a winter increase in coronavirus cases.

The government imposed new virus states of emergency in January in response, urging people to stay at home and calling for restaurants to close earlier.

The contraction was largely in line with economists' expectations.

"Personal consumption has been particularly hard-hit by the Covid-19 emergency measures," Naoya Oshikubo, senior economist at SuMi TRUST, said in an analysis issued ahead of the official data.

Capital expenditure, including manufacturing, was down 1.4 per cent, but economists said that was only relative to a sharp increase in the previous quarter and the overall recovery trend was on track.

The drop in private consumption was not as bad as some had feared, said Marcel Thieliant, senior Japan economist at Capital Economics.

The two "big disappointments", he wrote in a note, came from drops in non-residential investment and public demand. Meanwhile, housing investment rose 1.1 per cent.

And while exports were up 2.3 pe rcent, imports rose by a larger 4.0 per cent,"so net trade knocked 0.2%-points off GDP growth," Thieliant added.

Economists warn that the slowdown is likely to continue, with the government forced to impose a third state of emergency in several parts of the country -- including economic engines Tokyo and Osaka -- earlier this month.

The emergency measures are tougher than in the past, and have been extended to the end of May as well as expanded to several other regions in recent days.

"The GDP slump will continue in Q2 2021. The third state of emergency introduced in April calls for shorter working hours and longer leave periods than previous ones, and may even be extended further," wrote Oshikubo.

Whatever happens with this summer's pandemic-postponed Tokyo Olympics is unlikely to affect the economy in a big way, he said.

"Even if the Games are cancelled, this won't come as a surprise and the impact on the economy and the market should be limited."

"With the medical situation still worsening and the vaccine rollout too slow, it will take until the end of the year for output to return to pre-virus levels," Thieliant said.

Japan's economy registered its first annual contraction since 2009 last year, reeling from the effects of the pandemic despite experiencing a smaller outbreak than many countries.

Revised figures released Tuesday showed the annual contraction was marginally better than initially estimated, at -4.7 per cent, from the earlier -4.8 per cent figure.

Japan has registered around 11,500 coronavirus deaths and has avoided the strict lockdowns seen in some places.

But the pandemic has nonetheless hit the economy hard in a country already struggling with weak consumption and a years-long effort to turbocharge inflation.

Analysts do not expect to see recovery in growth before the third quarter now, though Capital Economics warned risks to that forecast were tilted to the downside given the current virus resurgence and slow vaccination pace.

"We expect choppy waters ahead for manufacturing in the next quarter," he warned.