The travel bubble's new launch date will be reviewed towards the end of phase two of Singapore's reopening. - The Straits Times/ANN

SINGAPORE, May 17 (The Straits Times/ANN): The air travel bubble (ATB) to allow for quarantine-free travel between Singapore and Hong Kong will be delayed again, after a spike in Covid-19 cases in Singapore.

The Ministry of Transport (MOT) said on Monday (May 17) that Transport Minister S. Iswaran had a meeting on Monday morning with Hong Kong Secretary for Commerce and Economic Development Edward Yau on the issue.

"However, in the light of the recent increase in unlinked community cases, Singapore is unable to meet the criteria to start the Singapore-Hong Kong ATB."

Both sides have therefore agreed to defer the launch of the ATB to protect the health of travellers and the public in these two places, MOT added.

It said the two cities will monitor the public health situation and review the new launch date of the ATB flights towards the end of phase two (heightened alert) of Singapore's reopening.

Both cities had said the air travel bubble would be suspended when the seven-day moving average of unlinked community cases in either Singapore or Hong Kong increases to more than five.

As at Sunday, the seven-day moving average of unlinked community cases in Singapore had increased to almost five. There were also dozens of other linked cases in the community.

The bubble was slated to take off on May 26, six months after its initial planned launch last November. It was first deferred last year by both parties owing to the worsening Covid-19 situation in Hong Kong.

Former transport minister Ong Ye Kung, who is now Health Minister, had said last Friday that it is very likely that Singapore will not be able to meet the criteria to kick off the bubble.

"What we will do now is to closely monitor the numbers the next few days to review the start date, and early next week, we will make a decision and an announcement."

Ong said last week that he had briefed Hong Kong's Mr Yau about the Covid-19 situation in Singapore.

He said then that both cities are strongly committed to the bubble, but have to start it safely. They would also respect the resumption mechanisms that both sides had agreed on.

Meanwhile, Xinhua reported that the government of China's Hong Kong Special Administrative Region (HKSAR) confirmed that the HKSAR and Singapore have decided to defer the inaugural flights under the bilateral ATB scheduled for May 26 due to an escalating Covid-19 epidemic in Singapore.

A government spokesman said that the two sides will continue to closely monitor the epidemic situation in both places and will unveil further arrangements on or before June 13. - The Straits Times/ANN 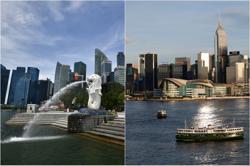