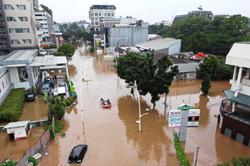 Vehicles move through floodwater at the Bank Indonesia traffic circle in Central Jakarta on Feb 25, 2020 as heavy rain inundated several areas of the capital. - Antara

JAKARTA (The Jakarta Post/ANN): The Big Durian has been ranked as the world’s most environmentally vulnerable metropolitan, as climate change, pollution, heatwaves, earthquakes and flooding are key threats to the capital’s residents and businesses.

Jakarta was dubbed the “worst-performing city in the ranking”, followed by India’s Delhi – each of which houses more than 10 million people – in a study of the world’s 576 largest cities conducted by United Kingdom-based business risk consultancy Verisk Maplecroft.

The report noted that Bandung and Surabaya were also among the world’s top 10 most environmentally vulnerable cities.

“With rising emissions driving weather-related risk and populations growing in many cities across the developing world, the risks to citizens, real assets and commercial operations are only going to rise, ” wrote Verisk Maplecroft head of environment and climate change Will Nichols of the report published on Wednesday (May 12).

A case in point, flooding in Jakarta in 2020 forced more than 34,000 residents to leave their homes and, according to Indonesian Entrepreneurs Association (Hippi) chair Sarman Simanjorang, cost an estimated Rp 1 trillion (US$70.05 million) in economic losses as stores were closed and supply chains disrupted.

“Controlling water pollution in rivers, for example, requires the Depok, Bekasi, Bogor [West Java] and Tangerang [Banten] administrations to curb water pollution in their respective areas because our rivers are connected, ” he said on Sunday.

Jakarta’s environmental risk is so dire that Indonesian President Joko “Jokowi” Widodo admitted in 2019 that it was one of the main reasons the government wanted to move the country’s capital to East Kalimantan.

“We need to stop overwhelming Jakarta with overpopulation, traffic congestion and water and air pollution. We have to tackle these problems, ” Jokowi said at a press conference at Merdeka Palace on Aug 26,2019.

Indonesia, as per its commitment to the landmark Paris Agreement, has committed to reducing its greenhouse gas emissions by at least 29 per cent relative to a business-as-usual scenario by 2030, but many researchers are skeptical as to the country’s chances of success, mainly due to its growing use of fossil fuels.

In March, the Environment and Forestry Ministry announced that the government was planning to set a net-zero emissions target for 2070.

“Indonesia’s commitment toward net zero emissions is, so far, set for 2070, which would be too late, because climate change would devastate people’s livelihoods by then, especially those living in vulnerable areas like Jakarta, ” he told The Jakarta Post via phone call.

The city’s policy, as embodied by the Jakarta Cleaner Air program, assumes that motorised vehicles contribute the largest share to Jakarta’s air pollution at 46 per cent.

Thus, Jakarta has launched several programmes to curb transportation pollution, such as by expanding public transportation and implementing no-emission zones.

“For regional administrations, the easiest and fastest mitigation solution is intervening in the transportation and mobility sector, ” she said.

Notably, environmental groups, such as the Centre for Research on Energy and Clean Air (CREA), have challenged the city’s assumptions with maps showing that most pollution comes from coal-fired power plants in the neighbouring provinces of Banten and West Java. - The Jakarta Post/Asia News Network 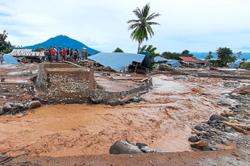