A volunteer arranges oxygen cyclinders inside a bus converted to provide oxygen to Covid-19 coronavirus patient with breathing problems while waiting to be admitted at government hospital in India on May 5, 2021. - AFP

BEIJING (Global Times): Chinese oxygen concentrator suppliers are upset and saddened by price-gouging of anti-virus devices such as theirs in the Indian market, calling the move a deviation from their original humanitarian intention.

Many Chinese producers have exported oxygen making items to India at below-market prices by working extra shifts for timely delivery, even during the recent May Day holiday, to ensure the much-needed goods are delivered to those who badly need them, industry insiders said.

The company allegedly procured more than 7,000 concentrators from local vendors and Chinese companies before selling them at "exorbitant rates" to Covid-19 patients and their families, The Indian Express reported on Monday.

"Once we sell them, we have no right to intervene the re-sale. From a business perspective, how to deal with sold goods is up to the buyers," an anonymous staff member of SysMed, a oxygen concentrator maker in Shenyang, Northeast China's Liaoning Province, told the Global Times on Tuesday.

But he was angered by the re-sale at such high prices in India.

"This behaviour has deviated from our original intention of selling anti-pandemic products at low prices under a call to help India get much-needed medical products," said the owner.

Normally, the profit margin for an oxygen device is about 20 per cent for domestic producers, but the middlemen tend to gain the biggest share of the profit.

Several industry insiders told the Global Times on Tuesday that Chinese oxygen concentrator makers kept their selling prices so low, that they barely have any profit by exporting to India.

The bulk commodity prices of materials like steel and plastic for making the equipment have shot up around the world, and some core spare parts like chips rely on scarce imports from the US, which are getting more expensive now. This makes it difficult to keep prices at pre-pandemic levels, the Global Times learned.

"We understand that some Indian businessmen intend to raise the prices before selling the devices to hospitals or clinics, but there must be a limit or standard to follow," said the owner, noting that the prices of the oxygen concentrators that were exported to India would not have been so low, if not for humanitarian intentions.

Other markets including the US also have strong demand for oxygen devices. But unlike India, those countries are willing to pay more and in advance, industry insiders said. However, India is in urgent need of the concentrators at the moment to save lives of the infected Covid-19 patients.

The black market in products including oxygen machines is a reflection of chaotic social management in India, which has become a common situation in the country, Liu Zongyi, secretary-general of the Research Center for China-South Asia Cooperation at Shanghai Institutes for International Studies, told the Global Times on Tuesday.

"The black market is the norm in India. It is an Indian thing and there is nothing that Chinese companies can do about it. We are actively providing anti-virus materials to India for humanitarian reasons, and we do our best to provide whatever they want, but when the products are delivered, we can't control at what price or to whom they are sold," said Liu.

India has been engulfed in a new wave of infections.

As of press time, the total number of reported coronavirus cases in India had topped 22.9 million, while deaths have surged to around 250,000, according to data from John Hopkins University.

To help the neighbouring country in its time of need, Chinese Ambassador to India Sun Weidong said in a recent interview with the Global Times that Chinese companies have been accelerating production of at least 40,000 oxygen generators orders placed by the Indian side - and they are working around the clock to deliver them as soon as possible. - Global Times 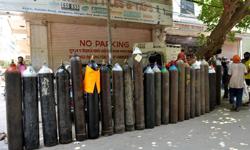