MANILA, Philippines, April 22 (Philippine Inquirer/ANN) — The Philippines is facing “a worse state of press freedom” after it ranked 138th out of 180 countries in the 2021 World Press Freedom Index, the Commission in Human Rights (CHR) said Thursday.

“The persecution of the media has been accompanied by online harassment campaigns orchestrated by pro-Duterte troll armies, which also launched cyberattacks on alternative news websites and the site of the National Union of Journalists of the Philippines, in order to block them, ’’ RSF said in its report on the Philippines.

The RSF classified the Philippines as having a “bad” environment for journalism.

The CHR said the report “sends a firm message that the current political climate exacerbates the danger and fears over the erosion of democratic and press freedom during these uncertain times.”

It urged the government to provide legal protection to journalists as they perform their duties and to hasten the investigation of media-related killings and attacks.

The CHR said it has repeatedly raised concerns on the “wave of persecutions directed towards journalists and media institutions, as a recurring theme in the current administration’s actions and pronouncements.”

It also expressed alarm over the Cybercrime Prevention Law and the Anti-Terrorism Act, which posed “legitimate threats to further threaten freedoms of speech and expression, particularly in articulating political sentiments or dissent.”

“This is an overt way of silencing criticisms toward government actions, or the lack thereof, in matters affecting public interest, ” it said. 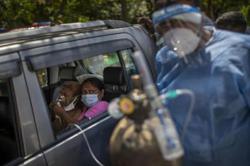