HONG KONG (AFP): Asia markets clawed back the week's losses on Thursday (April 22) after Wall Street broke a two-day dip overnight that had been sparked by Covid-19 jitters and valuation fears.

Investors took the New York drop as a cue to buy, with the Dow rising back above 34,000 and closing in on last week's record finish.

Further growth in US stocks is on the horizon in the coming days with analysts expecting a run of corporate results to give a clearer picture of the post-pandemic American economy.

"Spooky events will happen from time to time but provided the macros hold up and the Fed continues to toggle the policy taps wide open, it's unlikely the market will shift too far from the recovery reality," he added.

"While certainly investors have priced in a lot in terms of normalisation in certain segments of the market, I still think that there is room to run," she added.

Tokyo led the Asian recovery with the Nikkei up more than two per cent by the break, despite an escalating coronavirus outbreak just three months before Japan hosts the pandemic-delayed Olympics.

Organisers said they may hold off on a planned announcement this month to dictate how many domestic spectators can attend the Games in light of the virus situation, after earlier barring overseas fans.

Analysts warned that an expected further tightening of coronavirus restrictions could generate worries over economic recovery as cases spike in Tokyo and elsewhere.

Hong Kong was up 0.3 per cent while Sydney, Seoul, Singapore and Taipei were all on the rise, but Shanghai was down 0.1 per cent.

Investors were keeping watch for the European Central Bank meeting due later Thursday following overnight news from the Bank of Canada that it would bring forward its rate hike forecasts to next year and pare back pandemic asset purchases.

"The key question for markets is does the BoC Statement prove to be a watershed moment for central banks in which they revert back to outcomes based guidance as the data improves," said Tapas Strickland of the NAB.

US Federal Reserve chair Jerome Powell's press conference next week should give more indication of revisions to interest rate forecasts, he added.

Oil futures continued their stumble with both major benchmarks down nearly one percent after a rise in US crude reserves.

"But given the strength in US refining margins and seasonal tailwinds, we should expect them to bounce back over the coming weeks," Innes said.

Softer oil prices were supporting gold, with the safe-haven commodity also bolstered by lower US yields and higher import quotas from Chinese banks, he added. 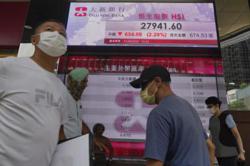