JAKARTA, April 17 (Reuters): As Indonesia's Covid-19 total reached 1,599,763-total on Saturday after 5,041 ....... new cases was recorded; Indonesian state companies building a Chinese-funded high-speed rail line are negotiating for Beijing to increase its stake in the project after budget overruns look set to boost costs by a fifth, a company executive said.

The 142 km (88 miles) rail project, connecting the capital Jakarta to Bandung, which is part of China's Belt and Road Initiative, was originally expected to cost 66.76 trillion rupiah ($4.57 billion) when awarded to a consortium of Chinese and Indonesian state firms in 2015.

Construction company Wijaya Karya has the biggest share in a 60% stake it co-owns with other Indonesian firms in the consortium, named PT KCIC. The China Railway Engineering Corporation and other Chinese companies control the rest.

Wijaya Karya President Director Agung Budi Waskito expected costs to rise by 20% to finish construction, due between the end of next year to early 2023, and said that companies were in talks with Chinese counterparts to reduce their 60% stake.

"We hope Indonesia has a smaller portion than what it is now so the cost overrun can be borne by the (Chinese) government," Agung told an online seminar on Wednesday.

A China Railway Engineering representation in Jakarta declined to comment. A Chinese embassy spokesman in Jakarta did not immediately respond to a request for comment.

"Until now, details regarding additional unexpected costs are still being discussed and negotiated at the shareholder level. Also, consultations between the Government of Indonesia and China are continuing," Mirza said in a text message.

The project, which is funded by the China Development Bank, kicked into gear in 2018 after nearly three years of delays over land ownership disputes.

Construction also had faced labour shortages due to travel restrictions during the early months of the coronavirus pandemic, although has since resumed. 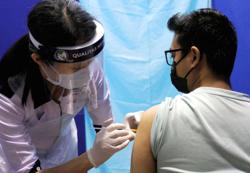