Spokesperson for the Ministry of Foreign Affairs Le Thi Thu Hang at a press conference in Hanoi. - Vietnam News/ANN

She made the remarks during a press briefing in Hanoi after Vietnamese citizens called for boycotts of several international fashion brands using a map with China’s unlawful nine-dash line, a representation of the country's expansive claim over much of the South China Sea (known in Vietnam as the East Sea), including the Hoang Sa and Truong Sa islands.

The claim has been met with a strong rebuke from the international community and especially claimant states involved in the disputes, including Vietnam.

The Vietnamese backlash started after the Swedish multinational clothing retailer H&M agreed to "rectify" a map it used on its website in China following Chinese authorities’ requests.

While neither side revealed details of the problem with the map or how the company changed it, posts claiming that H&M has complied with the order including a graphic with the nine-dash line became widely shared on Chinese social media, which eventually reached the Vietnamese online community.

Many Vietnamese users pointed out that the problematic map is also embedded on the Chinese websites of several other fashion brands including Chanel, Louis Vuitton, Gucci and Zara.

“Vietnam requests that all businesses respect its sovereignty over the Paracel and Spratly islands, and its sovereignty, sovereign rights and jurisdiction over relevant waters in the South China Sea,” the diplomat added.

She reiterated that Vietnam has a full historical basis and legal grounds over the two islands as determined by the 1982 United Nations Convention on the Law of the Sea (UNCLOS).

Most businesses use Google Maps on their website, but since Google products are not available in mainland China, businesses operating there have to embed Chinese-owned map services, with the most popular being Baidu.

Regarding recent developments in the South China Sea, especially rising tension between the US and China, Hang emphasised that “peace, stability, co-operation, and development in the sea is the shared aspiration and goal of all countries in the region and the international community at large.”

The respect for maritime rules-based order at sea and the implementation of the UNCLOS 1982, with a high sense of responsibility and goodwill, will be important to realise these objectives, she said.

“Vietnam calls on all countries to contribute to the maintenance of peace, stability, and co-operation in the South China Sea.

"The countries also must continue to adhere to international laws in goodwill including the UNCLOS 1982, strictly comply with the Declaration on the Conduct of Parties in the South China Sea between Asean and China (DOC) – in particular exercising restraint and avoiding escalating of tensions, creating an environment conducive to the negotiations of an effective and substantive Code of Conduct (COC), thus contributing to building trust, maintaining trust and stability, promoting the international order at sea and ensuring security, safety, and maritime freedom in the South China Sea,” Hang stated. - Vietnam News/ANN 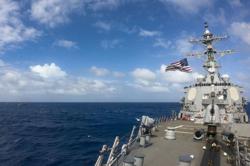