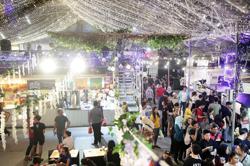 FEROZ Abdullah, 46, has been a fixture at the Geylang Serai Hari Raya bazaar for the past 30 years, mainly selling traditional Malay clothing.

At 16, he ran his first bazaar stall with help from his father. Now he is marketing his own brand, Glamour Muzika. He also has a permanent stall in Joo Chiat Complex.

The cancellation of all bazaars since March last year has forced Feroz and other vendors to change their sales strategy.

Bazaars like the popular Geylang Serai bazaar have traditionally operated during the fasting month of Ramadan, which will fall between April 13 and May 12 this year.

But the Covid-19 pandemic put paid to physical bazaars and, as they are unlikely to return soon, merchants have moved to virtual bazaars, social media and e-commerce websites.

Many merchants said going online had been challenging, with Feroz saying it was not as profitable.He said: “In 2019, I earned about S$250,000 (RM768,000) from my bazaar stalls. When bazaars were cancelled last year I only made about S$70,000 (RM215,054) from my website and Facebook Live sessions during the Ramadan period.”

The merchants pointed out that demand online fluctuates.

Stephen Suriyah, owner of The Original Vadai, which is known for its deep-fried fritters with prawn, said: “Once phase two began and Ramadan ended, interest in online bazaars died down as people could start dining out again.”

Mohammad Hafiz Atan and his wife, who run burgerjb.dques, a home-based business selling Malaysian-style street food, saw their online orders dip from about 40 a day during Ramadan last year to eight once the fasting month ended.

Regular visitors to the Geylang Serai bazaar like Hernandes Lim, 21, said Ramly burgers and deep-fried Oreo biscuits are among the bazaar treats he misses the most.

He also misses trying new things with his friends at bazaars, which he thinks cannot be done online.

She said: “One reason people go to bazaars is to go from shop to shop with friends to buy all sorts of food and enjoy the vibes there.

“For me, buying bazaar food online is no different than ordering food from GrabFood or Deliveroo.” — The Straits Times/ANN