SINGAPORE, March 28 (The Straits Times/ANN): Air quality hit unhealthy levels again in the northern parts of Singapore on Sunday evening, because of high concentrations of ozone, according to the National Environment Agency's (NEA) website.

At 8pm, the Pollutant Standards Index (PSI) reading stood at 114, in the unhealthy range, though it returned to the moderate range at 9pm, with the PSI dropping to 97.

Air quality is considered unhealthy when the PSI is in the range of 101 to 200. Under these conditions, healthy people are urged to reduce prolonged or strenuous outdoor physical exertion, while vulnerable groups, including the elderly, should minimise prolonged physical activity.

When the PSI is above 200, it is in the very unhealthy range.

This means that a spike in concentrations of any one of the six can lead to a deterioration in air quality.

As at 9pm on Sunday, the ozone sub-index, which is based on the eight-hour average concentration, was above 100 in the north, central and south regions of Singapore, according to the NEA website.

During periods of haze caused by forest fires in the region the dominant pollutant is PM2.5.

On Sunday, the hourly concentration of fine particulate matter remained in the normal range. The 24-hour average of the PM2.5 readings was within the moderate range.

Similar conditions had been reported on Feb 27, when PSI levels had gone into the unhealthy range.

An NEA spokesman told The Straits Times on March 2 that the pollutants which contribute to the formation of ozone, such as nitrogen dioxide and volatile organic compounds - were within the normal levels. 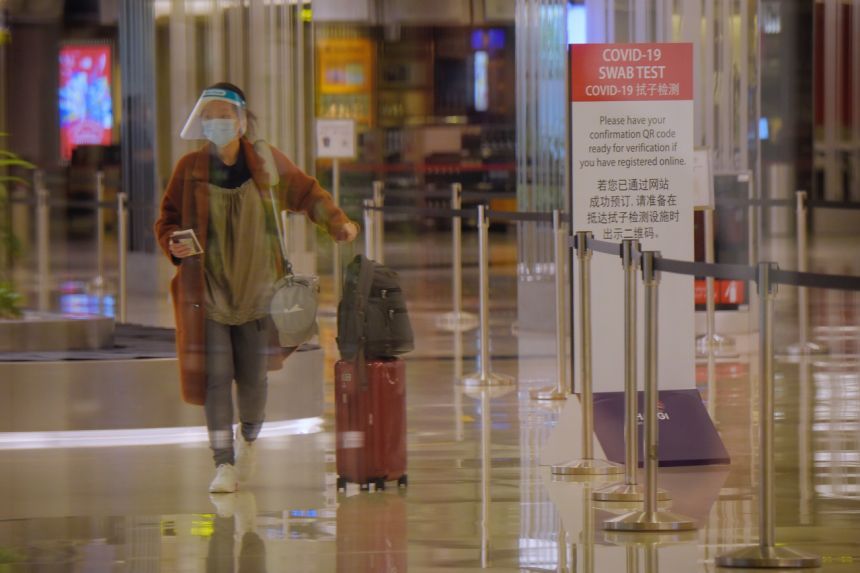 However, weather conditions such as ambient temperature, ultraviolet levels, wind speed, wind direction and rainfall can also influence the formation of ground-level ozone.

For example, the maximum temperature on Feb 27 was 35.3 deg C. This was the highest recorded in 2021 for the northern region, the spokesman said.

Coupled with high ultraviolet levels, this could have contributed to the elevated ozone levels, reaching the unhealthy range, she added.

In another development, Singapore's Ministry of Health (MOH) reported 12 new confirmed cases of Covid-19 on Sunday (March 28), bringing its total tally to 60,300.

All of the new infections were imported cases.

On Sunday, nine more Covid-19 patients were discharged from hospitals or community isolation facilities, bringing the total number of recoveries from the coronavirus epidemic to 60,122 in the country, according to the ministry.

There are currently 33 active cases being treated in hospitals. Of them, one is in critical condition and held in the intensive care unit.

Furthermore, 115 people, who have mild symptoms or are clinically well but still test positive for COVID-19, are being isolated and cared for at community facilities.

Singapore has so far reported 30 deaths from Covid-19. - The Straits Times/ANN