JAKARTA, March 24 (Reuters): Indonesia will not withdraw fiscal support for the economy abruptly, but will continue lowering the deficit, with the 2022 budget gap set to be below this year's level, Finance Minister Sri Mulyani Indrawati said on Wednesday.

Her remarks come amid concerns about the risk of cutting fiscal support too rapidly. The government has allowed itself larger budget deficits only for three years from 2020. By 2023, its fiscal gap has to drop to below a legal limit of 3% of gross domestic product.

The 2022 deficit is "definitely going to be lower than this year...hopefully it's going to be a smooth bridging from this extraordinary time .. into the 3% in 2023," she told a Fitch Ratings' seminar.

While the government does not plan to "abruptly shut off" fiscal support in light of this, stimulus will be tapered, she said.

A newly launched sovereign wealth fund will also reduce the burden on the government to prop up the economy, she said.

Indonesia fell into recession for the first time in over twenty years last year due to the fallout of the coronavirus pandemic. Officials on Monday said they expected the economy to emerge from recession in the next quarter.

The minister also reiterated on Wednesday that an agreement with the central bank to provide special fiscal deficit financing was only for 2020. She promised to update the market if there were changes in spending plans and the deficit.

She said policy makers were monitoring the impact of measures in advanced economies, such as a large U.S. fiscal stimulus and its implications for inflation and interest rates.

"These are all very dynamic, but what I want to communicate very clearly is that the government as well as Bank Indonesia commit to support recovery, but we also continue to watch (for) stability, especially related to inflation, exchange rate and interest rate implication to our policy framework," she said. - Reuters
Article type: metered
User Type: anonymous web
User Status:
Campaign ID: 46
Cxense type: free
User access status: 3 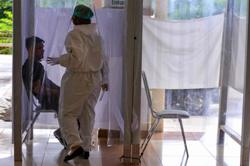