The PT Panca Amara Utama (PAU) plant in Luwuk, Central Sulawesi, loads its first shipment of ammonia on Jul 7, 2018. The company signed a memorandum of understanding on March 18, 2021 to begin a feasibility study on developing a blue ammonia plant in the province.(PAU/PAU)

Publicly listed gas refiner PT Surya Esa Perkasa (SEP) announced in a press release on March 19 that under the terms of the agreement, its subsidiary PAU would conduct a joint study on CCUS for clean fuel ammonia production with the Japan Oil, Gas and Metals National Corporation (JOGMEC), the Mitsubishi Corporation and the Bandung Institute of Technology (ITB).

The study is to take place near the PAU ammonia plant in Luwuk and the Mitsubishi liquefied natural gas (LNG) plant in Donggi Senoro, both in Central Sulawesi, with SEP planning to build the blue ammonia plant in Banggai regency.

“As [the owner of] one of the newest and most efficient ammonia plants in the world, PAU is ideally placed to help achieve the government's CO2 [carbon dioxide] emissions reduction target of 29 per cent by 2030, ” CEO Chander Vinod Laroya of SEP said in the statement.

Expectations are growing for ammonia to become a source of next-generation clean energy, as it does not emit CO2 during combustion.

Mitsubishi said in a separate press release that the blue ammonia produced by the PAU plant would be exported to fuel coal-fired power plants in Japan.

“Through this clean fuel ammonia project, we will make an effort to contribute towards realising a decarbonized society and securing stable energy supply for Japan, ” Mitsubishi said in the release.

In a research note in January, HSBC said that gas-based blue ammonia would comprise the bulk of future hydrogen-powered transportation, given its lower production costs compared to renewable ammonia and its ease of distribution compared to liquified hydrogen.

Blue ammonia’s potential as a future fuel source has grown considerably in recent years due to its high hydrogen content, zero CO2 emissions during combustion and proven logistics.

Blue ammonia is created by harvesting hydrocarbons and converting them into hydrogen and ammonia, which can then be used to fuel power plants without emitting CO2.

Only a few companies produce blue ammonia, including Saudi Arabia’s Aramco, which delivered the world’s first shipment of blue ammonia last September, when it exported 40 tonnes of the chemical to Japan for fueling its power stations.

According to Aramco, this meant it had “the potential to make a significant contribution to an affordable and reliable low-carbon energy future". - The Jakarta Post/Asia News Network 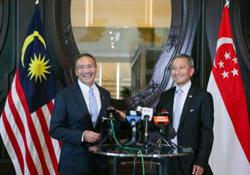