MANILA (Philippine Daily Inquirer/ANN): The loans and grants secured by the Department of Finance (DOF) to bankroll the war chest against Covid-19 stood at US$14.29 billion (about P696 billion) as of mid-March.

The latest figures released by the DOF on March 17 were “rebased to reflect 2020 average exchange rates, ” it said.

The updated list of loans and grants from multilateral banks as well as bilateral development partners did not yet include the $500-million loan from the Washington-based World Bank and the $400-million financing approved by the Manila-based Asian Development Bank (ADB) last week for the Philippines’ Covid-19 vaccination programme.

These $900 million in loans will only take effect once the agreements were signed between the Philippine government and the lenders, which were scheduled also this month, Finance Undersecretary Mark Dennis Joven earlier said.

In the case of the ADB loan, the bank will directly pay vaccine suppliers such that the money would never pass through the government.

According to the DOF, the bulk of financing it raised last year for Covid-19 response was injected into the budget for priority programmes and projects, amounting to $13.35 billion (about P650 billion).

The Philippines also raised a total of $5.1 billion from two rounds of issuances of US dollar-denominated global bonds last year.

Except for two loans, these financing took effect or were injected to the budget last year. The World Bank’s $580-million beneficiary FIRST social protection project became effective in January this year, while the same lender’s promoting competitiveness and enhancing resilience to natural disasters subprogram 2 loan took effect in February.

As for specific projects related to Covid-19 such as purchase of personal protective equipment (PPE) and health system capacity improvement, among others, the Philippines secured $915 million in loans — four from the World Bank totaling $790 million, and a $125-million ADB loan — last year.

On top of these loans, the ADB gave the Philippines $8 million across two grants, while the Japanese government granted $18.74-million worth to provide the Department of Health (DOH) with medical equipment.

Besides the World Bank and ADB loans for vaccines, the AIIB was also expected to shell out $300 million for the Philippines’ $764.17-million second health system enhancement to address and limit Covid-19 (Heal 2) project it was co-financing with the ADB and the national government. - Philippine Daily Inquirer/Asia News Network 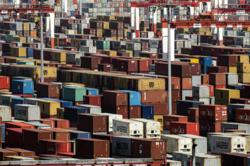