Over 1,500 tech-related jobs on offer at Singapore's virtual career fair SINGAPORE (The Straits Times/ANN): More than 1,500 technology-related jobs across various sectors are on offer at a virtual career fair that starts on Saturday (March 13).

Over 100 organisations are participating in the two-week Smart Nation and U: Virtual Career Fair, including e-commerce platform Shopee and Standard Chartered Bank, as well as public agencies such as the Government Technology Agency and the Infocomm Media Development Authority.

The positions offered vary from those that require deeper tech expertise like software developers who need coding skills, to "tech-lite" roles that do not require a tech background but may involve the use of tech on the job.

One such tech-lite job on offer is that of a digital warehouse assistant. The employee will need to use automation tools, such as machines and software to help him manage goods in a warehouse.

The National Trades Union Congress' Employment and Employability Institute (e2i) is organising the virtual fair with support from unions, employers and the Government.

Heng, who is also Coordinating Minister for Economic Policies and Minister for Finance, said at the event that the tech sector remains a bright spot for businesses and workers.

"In the coming years, technology and a growing digital economy will create many new opportunities and good jobs for our people," he said.

But Singapore must ensure that its workers are ready for the digital world, he noted, adding: "Digital literacy and even basic coding will be core to the workforce of the future. We are therefore starting young in schools, and upskilling our workers throughout life."

The Smart Nation and U event, which seeks to highlight opportunities for workers and businesses to upskill and transform digitally, will also feature physical fairs on tech-focused jobs and skills.

These Let's Go fairs are open to the public at five locations until Sunday. These are at Downtown East, Jurong Point, Nex, Suntec City and Toa Payoh HDB Hub.

Visitors can also speak with career and skills advisers from e2i and SkillsFuture Singapore at the fairs this weekend.

There are also free online webinars at the Smart Nation event for people to pick up basic digital skills, such as how to get started in e-commerce and how to create video content.

Details on the fairs, webinars and the Smart Nation and U event can be found at this website. - The Straits Times/Asia News Network 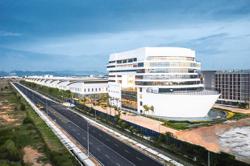