Among the rules set to be rolled out is the requirement for e-commerce players to declare if they carry out cross-border trade. - AFP

JAKARTA (The Straits Times/ANN): Indonesia will pass a new regulation that lays out rules for e-commerce in a bid to promote fair and healthy competition in the domestic market.

Among the rules set to be rolled out next month is the requirement for e-commerce players to declare if they carry out cross-border trade, Trade Minister Muhammad Lutfi told The Straits Times.

Online platforms selling foreign goods in Indonesia will be subject to the same obligations as offline traders offering locally-made products, he added.

"The regulation seeks to create a level playing field in the domestic market," he said. "If the offline traders must have distribution permits, online merchants will need to do the same thing."

Business practices in electronic marketplaces that the authorities deem "unfair" and harmful to local micro, small and medium enterprises came into the media spotlight after President Joko Widodo made a controversial suggestion to "hate foreign goods" and "love local products" during the trade ministry's annual work meeting last week.

One such practice is predatory pricing, in which the price is set low by sellers to kill off competition.

Lutfi pointed out a case of imported female Muslim prayer cloaks sold by online merchants at less than one-tenth of the price of similar locally-made items.

Rejecting the idea that the move is a form of protectionism, he said: "The regulation is created not to ban imports. Imports are allowed, but must comply with Indonesian rules."

At present, e-commerce platforms are subject to a regulation issued last year that, among other things, requires them to have trade business permits.

A report by Google, Singapore's Temasek Holdings and business consultancy Bain & Company last November estimated that the South-east Asian Internet economy would reach US$105 billion (S$141 billion) in 2020 as the Covid-19 pandemic pushed consumers to shop, get food and enjoy entertainment online.

While Singapore's Internet economy shrank by 24 per cent to US$9 billion as the pandemic hit the travel sector, Indonesia's and Vietnam's continued to expand at a double-digit rate.

Indonesian E-Commerce Association chairman Bima Laga told ST that its 236 members had complied with regulations. "We will abide by any regulation issued by the trade ministry because our members are legal Indonesian business entities," he said.

But Bima noted that pricing is a business decision the group cannot interfere with.

"Some can go with only 1 per cent profit, but some sell only if they get 5 per cent profit. We can't comment if that's related to the business decision of each player," he said.

"The penetration of online businesses is wider as people shop from home. So the regulation must be made fair for all," said Apindo chairman Hariyadi Sukamdani.

Tutum Rahanta, a member of Hippindo's advisory council, said the regulation would be necessary to ensure equality between online and offline traders, as well as between local and foreign goods.

Taxes and the cost of applying for permits add to the final price of goods, he said.

Offline retailers also sell the same goods online, but after fulfilling requirements such as those of the Indonesian National Standard and the Food and Drug Monitoring Agency. - The Straits Times/Asia News Network 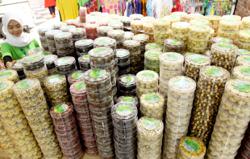