VIENTIANE, March 9 (Vientiane Times/ANN): Some 36 endangered wildlife species, identified by the International Union for Conservation of Nature (IUCN) Red List of Threatened Species, have been recorded in the Nakai-Nam Theun National Park in central Laos.

The park’s Executive Director, Savanh Chanthakoummane, told Vientiane Times last week that scientists who have been studying wildlife species acknowledge they have been unable to find these species anywhere elsewhere in the world.

In 2020, the Association Anoulak in cooperation with park authorities set up a second large-scale camera-trap wildlife monitoring programme in the national park.

From February to August 2020, the three biodiversity priority zones were surveyed with 133 camera-trap stations spaced roughly 2.5 kilometres apart. Two cameras were installed at each station. In total, 265 cameras were set up of which 255 were operational, according to the association’s annual report for 2020.

The cameras recorded globally threatened and near-threatened species which were identified by the IUCN Red List of Threatened Species.

Compared to the first systematic surveys conducted in 2018-2019, two more globally threatened and indicator species were recorded in 2020 - the endangered Annamite Striped Rabbit Nesolagus timminsi and vulnerable Coral-billed Ground Cuckoo Carpococcyx renauldi - according to the report.

The Nakai-Nam Theun was designated as a national park in February 2019. Covering an area of 4,270 square km within the provinces of Khammuan and Borikhamxay, the park is a global hotspot for biodiversity and is home to numerous rare and highly threatened species.

However, endangered species in Southeast Asia are under threat from unsustainable harvesting of forestry resources and illegal hunting of wildlife, triggered by the needs of local people and the international trade in these products.

Mr Savanh said “We need to protect these species. Wildlife conservation provides an opportunity for us to develop our nation and move towards sustainable development.”

“Our national park is unique in the way that these rare species cannot be found anywhere else.”

The Nakai-Nam Theun National Park has huge potential for the development of tourism activities, particularly night safaris similar to those organised in the Nam Et Phou Louey National Park, he added.

Night safaris allow visitors to get a firsthand experience of life in the jungle and learn how wild animals live in their natural habitat.

It is essential to encourage the participation of local communities in protecting forests and jointly patrolling national parks to prevent illegal logging and hunting.

It is also important to ensure tourism generates a fair income to local communities. If villagers earn sufficient income and realise the importance of wildlife and forestry resources, they will be less inclined to cut down trees and hunt wild animals. - Vientiane Times/ANN 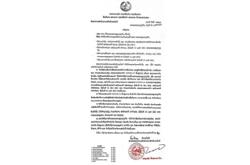