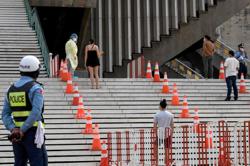 PHNOM PENH, March 5 (Xinhua): The National Assembly of Cambodia on Friday approved a draft Law on Measures to Prevent the Spread of COVID-19 and other Highly Contagious Diseases, which clearly stated financial penalties and prison sentences for violators. Eighty-three lawmakers, who were present at the parliamentary session, unanimously passed the bill that consisted of six chapters and 18 articles. Senior lawmaker Lork Kheng said under the law, quarantine escapees, who lead to the spread of Covid-19 to others, will be punishable by six months to three years in prison and a fine of 2,500 U.S. dollars. A COVID-19 patient fleeing treatment or a Ministry of Health-designated treatment facility will be imprisoned from one to five years and a fine of US$5,000, Kheng said, adding that the jail term will be increased to 10 years if the act leads to the spread of Covid-19 to others. "Someone intentionally spreads the Covid-19 to others will be punishable by imprisonment from five to 10 years, and the prison sentences will be raised from 10 to 20 years if the act is organized by a group or a syndicate," she said. Kheng added that the acts of deliberately disregarding administrative measures stated in the law or obstructing the enforcement of the measures will be punishable by imprisonment from six months to three years. Health Minister Mam Bunheng said the draft law was designed to combat the COVID-19 and to help minimize the impact of the pandemic on social and economic sectors in Cambodia. "This law, when it enters into force, will become a solid legal basis for the government to put forward measures-both health and administrative measures as well as other measures-to protect people's lives and public health," he said after the parliament passed the draft bill. The bill will need to be finally reviewed by the Senate before being submitted to King Norodom Sihamoni for promulgation. It was made as the country has been enduring the third community Covid-19 outbreak since Feb. 20. The South-East Asian nation has so far registered a total of 932 confirmed Covid-19 cases, with zero deaths and 489 recoveries, the Ministry of Health said. Cambodia on Thursday restricted travel to and from Southwestern Preah Sihanouk province after a rise in the Covid-19 cases there in recent days. Preah Sihanouk Provincial Governor Kuoch Chamroeun said in a statement that persons and vehicles are not allowed to travel in and out of the province, with an exception for vehicles for transporting goods. "Ferrying people by buses, taxis and other passenger carrying vehicles to and from Preah Sihanouk must be temporarily suspended until further notice," he said. "For cargo vehicles, they are still allowed to enter and leave the province, but the number of persons on each vehicle is limited to two only - a driver and a conductor." "For people living in Preah Sihanouk, please do not travel out of the province to other cities or provinces until further notice," he added. The governor also called on residents to stay at home and avoid unnecessary gatherings. - Xinhua
Article type: metered
User Type: anonymous web
User Status:
Campaign ID: 46
Cxense type: free
User access status: 3 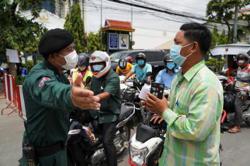