HANOI (Vietnam News/ANN): Vietnam’s trade balance posted positive US$1.29 billion in the first two months of the year, the General Department of Customs has said.

The country’s trade turnover during January-February topped some $95.81 billion, a year-on-year surge of 25.4 per cent. Of the total, exports amounted to $48.55 billion, a yearly hike of 23.2 per cent, while imports were estimated at $47.26 billion, or 25.9 per cent higher than the same time last year.

Foreign-invested companies accounted for 76.4 per cent, or $37.07 billion, of Vietnam’s total export turnover. Meanwhile, the domestic sector shipped abroad $11.48 billion worth of products.

The US was Vietnam’s biggest importer as it splashed out $14.2 billion on Vietnamese products, or 38.2 per cent higher than the amount it spent the same time last year. China came second with $8.5 billion, followed by the EU with $6.3 billion, Asean $4.2 billion, South Korea $3.4 billion, and Japan $3.2 billion.

Meanwhile, the country spent big ($47.26 billion) on imports, with the foreign-invested sector purchasing $31.64 billion worth of products from abroad for production, up 31.4 per cent, while that of the domestic sector surged 16 per cent to $15.62 billion.

In a bid to support local firms in promoting production and exports, the Ministry of Industry and Trade said that it will work to capitalise on opportunities from the signed free trade agreements to seek measures for market development.

Additionally, it will keep a close watch on the global market to identify key export products, while paying due heed to penning measures for market development.— Vietnam News/Asia News Network 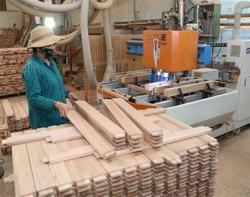