GENEVA: China’s vaccines have been making a crucial contribution to the global Covid-19 response as an ever-increasing number of countries receive the vital supplies –much of them donated, experts said.

Rasmus Bech Hansen, head of British research firm Airfinity, said China’s role in the production and distribution of Covid-19 vaccines has been significant.

Developing countries have been struggling in the vaccine rollout due to their limited capacity to store supplies at ultralow temperatures, and one advantage of the Chinese vaccines is that they require less cold storage, he said.

“They are easier to distribute, easier to contain. Especially for middle– and low-income countries they play a significant role and I would expect that going forward, ” Hansen said.

China has pledged to continue to provide Covid-19 vaccines to other countries, especially the developing ones, and reiterated its commitment to making them a global public good.

The country supported its companies in conducting joint research and production of vaccines with foreign partners. It has exported its Sinopharm and Sinovac vaccines to countries including the United Arab Emirates, Morocco, Turkey and Chile.

Among the most recent recipients is the Dominican Republic, where authorities in the Caribbean nation on Tuesday night received a shipment of the Sinovac vaccine.

The cargo was received at the airport in the capital by a delegation headed by Vice-President Raquel Pena.

“The arrival of this important batch of vaccines against Covid-19 will strengthen the already started national vaccination plan, and thus bring peace, hope and tranquillity to the Dominican family, ” said Pena.

Also on Tuesday, Egypt has received 300,000 doses of the Sinopharm vaccine.

China has signed an agreement with Gavi, the Vaccine Alliance, officially joining COVAX in early October, a global initiative working with governments and manufacturers to ensure Covid-19 vaccines are available to lower-income countries. — China Daily/ANN 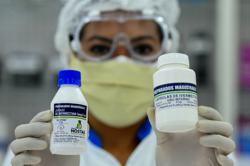