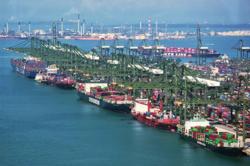 SINGAPORE (The Straits Times/Ann): Traditional Cantonese prawn dumplings called har gow will be one of the many Singaporean products to find greater market access in Britain when the UK-Singapore Free Trade Agreement comes into force on Thursday (Feb 11).

The deal was signed on Dec 10 last year by Trade and Industry Minister Chan Chun Sing and UK Secretary of State for International Trade Liz Truss. It took effect via provisional application on Jan 1, 2021.

Chan said on Wednesday (Feb 10): "The agreement... signals the strong commitment of the UK and Singapore to ensure continuity and certainty in trading arrangements between both countries. It will deepen the strong economic relations both countries share."

It also marks the first free-trade agreement between the UK and an Asean country, and sends a strong signal of Britain's commitment to deepen its economic engagement with the region, Chan said.

"We hope that companies will utilise this (agreement) and enjoy its benefits," he added.

Under the deal, Singapore and UK companies will enjoy the same benefits that they received under the European Union (EU)-Singapore free trade deal, including tariff elimination for goods trade, increased access to their respective services and government procurement markets as well as reduction of non-tariff barriers.

The trade agreement will help Singapore and the UK further strengthen their business hub status in their respective regions and boost Britain's engagement in South-east Asia.

The British government has already taken steps to close ranks with Asia's regional blocs following its successful bid to become an Asean Dialogue Partner and has shown keen interest in joining the Comprehensive and Progressive Agreement for Trans-Pacific Partnership.

The new trade deal covers more than £17 billion (S$30.3 billion) of current bilateral trade in goods and services between Singapore and the UK.

Its immediate benefits include elimination for 84 per cent of all tariff lines for Singapore exports to Britain, with virtually all remaining tariffs eliminated by November 2024 - the same timeline under the EU deal.

However, the enhanced market access in the UK for Asian food products made in Singapore, such as har gow and sambal ikan bilis (spicy crispy anchovies), is separate from the quota provided for under the EU agreement

These processed food products will be able to enter the UK tariff-free up to a combined quota of 350 tonnes annually.

The two countries have also agreed to assess the modules of a UK-Singapore digital economy agreement, with a view to launching negotiations this year. - The Straits Times/Asia News Network