HANOI, Jan 24 (Vietnam News/ANN): A total of 1,587 delegates representing more than 5.1 million Party members nationwide will participate in the coming 13th National Party Congress, making this the largest number ever in the history of Party congresses.

Mai Van Chính, Deputy Head of the Party Central Committee’s Organisation Commission, yesterday announced the figure at a press briefing regarding the congress, slated to begin on Monday (Jan 25), in Hanoi.

Women and ethnic minority groups account for 13.99 and 11.03 per cent of the delegates, respectively, according to Chính.

The guests will include former Party and State leaders, ambassadors, and heads of international organisations in Hanoi, representatives from the intelligentsia and arts community, outstanding youth union members and religious officials, among others.

On documents submitted to the Congress, Nguyen Xuan Thang, Director of the Ho Chí Minh National Academy of Politics, Secretary of the Party Central Committee, Chairman of the Central Theoretical Council, said there were “numerous new items, especially in terms of approach.”

“When setting out a vision and orientations for the country’s development, we don’t just draw up plans for the next five years but a vision and orientations towards the middle of the century, with the desire to unleash the strength and will of the Vietnamese people to successfully build the socialist cause and protect the Socialist Republic of Vietnam in the new context, ” Thang stressed.

The agenda of the congress focuses on reviewing the implementation of the Resolution of the 12th Party Congress associated with the evaluation of 35 years of implementation of doi moi (Renewal), the 10-year socio-economic development strategy 2011-2020, and outlines the socio-economic development orientations and tasks for the five-year period 2021-25 and goals and orientations to 2030 and the national development vision to 2045.

The Party officials were also informed that all the preparations for the congress have been completed, from security to logistics and reception.

Meanwhile, Vietnam reported no new cases of Covid-19 infection on Saturday, leaving the total confirmed cases in the country at 1,548 with 35 deaths, according to its Ministry of Health.

The ministry also announced that 1,411 patients have been given the all-clear as of Saturday.

Meanwhile, over 19,100 people are being quarantined and monitored, the ministry said.

The country has gone through 53 consecutive days without any new COVID-19 cases in the community, according to the ministry. - The Vietnam News/Asian News Network 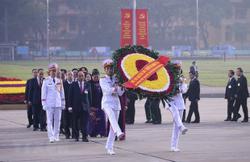