Thirteen killed in gang shoot-out with police in Philippines

MANILA, Jan 24 (dpa): Twelve suspected members of a criminal gang and a police officer were killed on Saturday in a pre-dawn shoot-out in the southern Philippines, police said.

Four police officers were wounded in the firefight in the village of Limbo in Sultan Kudarat town, Maguindanao province, said Ismael Madin, chief of the provincial police's investigation unit.

The clash erupted when a team of police attempted to serve an arrest warrant against the leader of the gang, who was a former village captain, Madin said.

The suspects opened fire on the police officers as they approached the safehouse, he added.

Additional police forces and marine soldiers were dispatched to assist the officers, who came under heavy fire, triggering a five-hour gun battle that forced some residents to flee the village, Madin said.

The gang was blamed for a string of murders, hijackings, robberies and extortions in nearby Cotabato City. 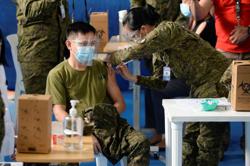