PHNOM PENH, Jan 24 (The Phnom Penh Post/ANN): Cambodia and Hungary have agreed to further boost economic and tourism ties, while the private sector offers a rosy view of the EU country as a hub for expanding exports to Europe.

The consensus was reached during a January 20 in-person technical meeting at the Ministry of Commerce on the first of the two-day First Session of the Cambodia-Hungary Joint Commission on Economic Cooperation.

In a Facebook post on January 20, the ministry said the meeting was led by undersecretary of state Pen Sovicheat and Judit Vekei Kiss, director of the Department for Joint Economic Commissions under the Hungarian Ministry of Foreign Affairs and Trade.

Sovicheat said in the post that the two sides agreed on the content of the draft minutes of the January 20 meeting, which were set to be signed by commerce ministry secretary of state Tek Reth Kamrong and Hungarian foreign ministry deputy state secretary for export development Istvan Joo via video link on January 21 afternoon.

After the fall of the Khmer Rouge regime in 1979, the two countries re-established diplomatic relations, he said. Hungary provided Cambodia a wide range of assistance to help build peace and political stability, which paved the way for the Kingdom’s development.

Thourn Sinan, former Cambodia country director of the Cambodia-Hungary Trading House, told The Post that bilateral cooperation with Hungary would help boost trade and investment relations down the line.

Hungary, which he labelled an “agricultural powerhouse”, is well able to help develop the sector in Cambodia, which has demonstrated its vast growth potential in recent years.

“Hungary can share its agricultural experience with Cambodia, especially in connection with the development of food security and safety,” Sinan said.

In terms of economy and trade, he said Hungary is an important gateway for Cambodia to export goods to the UK and the EU bloc’s 27 countries.

He said: “As I see it, Cambodia’s current trade flows with Hungary are an important peg in the goods exchange on the whole and a sizeable entryway for Cambodia to step into the European market.

“As for the tourism sector, I’m of the belief that cooperation between the two countries will further deepen relations in the industry.

In 2020, Cambodia exported 1,839 tonnes of milled rice to Hungary and 118 tonnes of tobacco, according to data from the Ministry of Agriculture, Forestry and Fisheries.

On November 3, the Kingdom signed an air cargo agreement with Hungary during the visit of Hungarian foreign minister Peter Szijjarto.

The two countries also signed a pair of memorandums of understanding (MoUs) on the occasion. 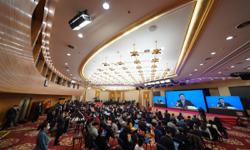