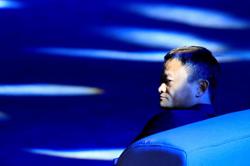 Jack Ma had kept out of public view since early November, when Chinese regulators torpedoed Ant's US$35 billion IPO. - Reuters

BEIJING (Bloomberg): Jack Ma has resurfaced after months out of public view that fuelled intense speculation about the plight of the billionaire grappling with escalating scrutiny over his internet empire.

China’s most recognisable entrepreneur addressed teachers via livestream Wednesday (Jan 20) during an annual event he hosts to recognise rural educators, according to people familiar with matter.

In a video of the event circulated online, Ma talked about how he’ll spend more time on philanthropy.

The co-founder of Alibaba and Ant didn’t mention his recent run-ins with Beijing during his address, which was first reported in a local blog. Ant confirmed the authenticity of the video in an email.

Alibaba’s shares gained more than 4% in Hong Kong. While it’s still unclear where Ma is, his emergence in a public forum may help quell persistent rumours about his fate while Beijing pursues investigations into online finance titan Ant Group Co. and Alibaba Group Holding Ltd.

The executive had kept out of public view since early November, when Chinese regulators torpedoed Ant’s US$35 billion IPO, tightened fintech regulations, then ordered an overhaul of Ant and launched a separate antitrust probe into Alibaba -- all in a span of days.

"Recently, my colleagues and I have been studying and thinking. We made a firmer resolution to devote ourselves to education philanthropy, ” Ma said in the video.

"Working hard for rural revitalisation and common prosperity is the responsibility for our generation of businessmen, ” Ma added.