A filepic of Thailand's Prime Minister Prayut Chan-O-Cha (centre) arrives for a photo opportunity with members of the new Thai cabinet at Government House in Bangkok. - AFP

The government already has the power to impose punishments under a state of emergency that was declared last March to deal with the health threat.

Prayut’s warning was an apparent reaction to charges that his government has done too little to acquire adequate supplies of vaccines. The criticism took on a sharp political tinge after a popular politician aired such allegations in an internet broadcast Monday night.

Thanathorn Juangroongruangkit, former leader of the dissolved Future Forward Party, accused the government of acting too slowly to inoculate the country’s population. Thanathorn has long been a thorn in the side of Prayut’s government.

His party made a strong third-place showing in the 2019 general election, but he was forced out of Parliament when a court ruled that he had broken an election law. His party was later dissolved on a similar technicality.

There also have been allegations that well-connected companies stand to profit unfairly from government contracts to produce a vaccine, charges denied by the government and the companies involved.

"Do not blame me for threatening legal action,” Prayut said. "I need to keep people’s confidence and trust in government.”

Health officials at a news conference Tuesday defended the effort to procure vaccines.

Supakit Sirilak, director general of the Medical Science Department, said the Health Ministry has been working to obtain vaccine supplies since last February, but has taken time to evaluate which are appropriate.

He said the government has targeted having enough vaccines to cover 50% of the population by the end of this year, and is attempting to secure more supplies to cover everyone.

A first batch of 200,000 doses of Sinovac vaccine from China is scheduled to arrive next month. After that, 26 million doses of a vaccine developed by Oxford University and AstraZeneca, a British-Swedish pharmaceutical company, to be manufactured in Thailand will start being distributed in May.

Public concern about the vaccine situation shot up last month after Thailand experienced a surge in its relatively modest number of confirmed coronavirus cases.

At the beginning of December, Thailand had 4,008 cases. Following an initial wave of cases that began in March, almost all new infections had been found among people who were quarantined after arriving from abroad.

Most of the cases since mid-December have been linked to migrant workers from neighboring Myanmar employed in seafood markets and factories in a province next to Bangkok. A second cluster was found among itinerant gamblers who frequented illegal gambling dens. 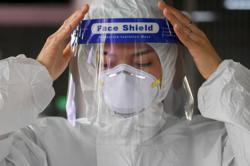