Good deed: The distribution drive was part of the National Day of Service in the US organised by the PIC. — The Straits Times/ANN

A group of Americans living in Singapore distributed more than 300 care packs to needy families at a rental block here as part of events leading up to the inauguration of US president-elect Joe Biden on Wednesday.

The distribution drive yesterday was part of the National Day of Service in the United States organised by the Presidential Inaugural Committee (PIC) for Biden and Vice-President-elect Kamala Harris.

It was the first such initiative to be organised outside of the United States in collaboration with the PIC, said Steven Okun, governor of the American Chamber of Commerce (AmCham) in Singapore.

The event was organised by AmCham and the American Association of Singapore (AAS).

“The PIC called upon Americans to serve their communities across the United States. With much of the world watching what will be one of the most important US inaugurals ever, we want to show that the new beginning for the United States will be global, ” said Okun, a senior adviser at global strategic consultancy McLarty Associates.

AmCham chief executive Hsien-Hsien Lei added: “We are happy to show our continued commitment in giving back to the community.”

The packs, purchased with about S$10,200 (RM30,907) donated over the past week by Americans living here, consisted of rice, Milo, detergents and toiletries.

One of the recipients, 68-year-old Lim Hay Tong, said the items would help him save on expenses, especially as he could no longer work after suffering a stroke.

Another recipient, 64-year-old Tinamany A. Raman, said she treasured the gifts and would use them slowly according to her needs.

AAS president Blair Hall said: “The American Association has a long tradition of charitable and volunteer service contributing to health, environmental and social welfare efforts in the greater Singapore community in which its members thrive.” — The Straits Times/ANN 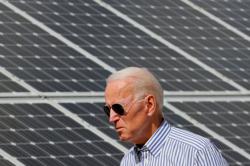