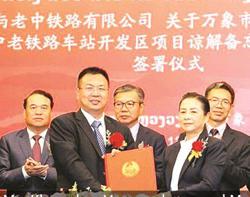 VIENTIANE, Jan 18: The Laos-China Railway project has completed 242 kilometres of track and is expected to successfully complete the full track in May this year, reports Laotian Times.

According to a report by Lao Security News, the Lao-China Railway project has now completed almost 60% of track laying.

Chairman of China Railway International Co, Ltd, Ju Guojiang, meanwhile, says the railway tunnels, bridges, and the subgrades have been completed at 95 per cent.

“The railway tracks have now been laid over 242 kilometres, and we expect to complete this successfully in mid-May this year,” said Ju.

The Laos-China railway tracks are now in place from Vientiane Capital to Luang Prabang Province, while the largest passenger railway station, located in Vientiane Capital, is now coming to completion.

The Laos-China Railway Construction Project commenced in December 2016 and is scheduled to be completed and operational in December 2021.

However, the project has reported that it has experienced some delays due to issues including mediation with villagers residing in areas allocated to the project.

The Laos-China Railway will run some 414 kilometers, including 198km of tunnels, and will traverse 62km of bridges. It will run from the Boten border gate, connecting Northern Laos to China, down to Vientiane Capital, with an operating speed of 160km per hour.