VIENTIANE (Vientiane Times/ANN): Authorities have ordered inspections of imported seafood amid fears that food imported from Thailand could be contaminated with the coronavirus following a fresh outbreak in that country.

The National Taskforce for Covid-19 Prevention and Control on Dec 24 issued a notice asking the ministries responsible to begin inspections.

It came shortly after the Ministry of Industry and Commerce banned the import and transit via Laos of seafood from neighbouring countries that have an ongoing outbreak of Covid-19.

It was seen as a clear reference to Thailand, a main seafood supplier for Laos, after an outbreak of Covid-19 was reported at a wholesale shrimp market in the kingdom’s Samut Sakhon province.

The taskforce told the Ministry of Industry and Commerce and Ministry of Agriculture and Forestry to compile a list of seafood business operators across the country, to ease the inspection and monitoring process.

The Ministry of Public Works and Transport was asked to draw up specific regulations concerning the transport of seafood.

In a notice issued on the same day (Dec 24), the Ministry of Industry and Commerce said the ban would be lifted once Laos and authorities in the seafood exporting countries could certify the safety of seafood.

The Covid-19 outbreak in Samut Sakhon, a seafood hub southwest of Bangkok, has spread to 22 provinces in Thailand, the Bangkok Post reported on Dec 23.

The virus was apparently carried by vendors who visited the shrimp and other nearby markets to buy fresh seafood for sale in their provinces, or by people transporting shrimp and other seafood to and from markets at the epicentre of the outbreak.

Thousands of new cases of Covid-19 have been confirmed across Thailand following the Samut Sakhon outbreak.

Fear in Laos escalated because Thailand is a main supplier of seafood. Furthermore, a number of Lao nationals have been working in that country and could bring the virus into Laos.

Most of the people employed in the Thai shrimp market where the new outbreak is believed to have originated are Myanmar nationals, but people of other nationalities are also employed, including Lao, according to the Bangkok Post.

Lao authorities are tightening up virus prevention and control measures in light of the rising number of infections in countries in the region and globally.

The government has suspended charter flights with countries where there is an outbreak, prohibited entry into Laos by citizens of outbreak countries, and banned large gatherings on public holidays and at special events. - Vientiane Times/Asia News Network 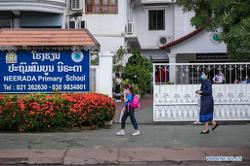