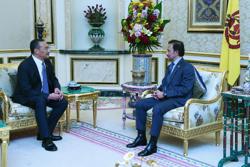 SINGAPORE (The Straits Times/ANN): Deputy Prime Minister Heng Swee Keat visited Brunei on Tuesday (Nov 10) to offer his condolences on behalf of the Government to Brunei's Sultan Hassanal Bolkiah on the death of his son, Prince Abdul Azim.

Heng, who is also Coordinating Minister for Economic Policies and Minister for Finance, had an audience with Sultan Hassanal Bolkiah.

He also called on and was hosted to lunch by Crown Prince Al-Muhtadee Billah, who is Senior Minister in the Prime Minister's Office of Brunei.

Accompanying Heng on the trip was Dr Maliki Osman, Minister in the Prime Minister's Office (PMO) and Second Minister for Education and Foreign Affairs, as well as officials from the PMO and MFA.

"Prince Azim was well known for his dedication to developing more opportunities for youth, and helping the less fortunate in society," Heng wrote in a Facebook post on Tuesday.

"Prince Azim studied in Singapore during his schooling years and was also a friend of Singapore," he added.

Prince Abdul Azim died from multiple organ failure on Oct 24 due to an autoimmune disease. He was 38.

He was diagnosed with severe systemic vasculitis earlier this year, a condition characterised by inflammation of blood vessel walls.

Fourth in line to succeed the throne of Brunei, Prince Abdul Azim was the second son of Sultan Hassanal Bolkiah.

Heng added of his meeting with Crown Prince Billah: "We agreed to explore new ways to further deepen collaboration between our two countries."

"I look forward to welcoming His Majesty and HRH Crown Prince Billah to Singapore when conditions for international travel are more favourable," he added. - The Straits Times/Asia News Network 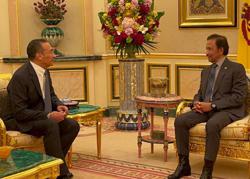