FROM raising hundreds of thousands of dollars for Thai protesters to inspiring the youths who join demonstrations through dances and social media, K-pop fans have emerged as a potent political force in Thailand’s anti-government movement.

Earlier this year, K-pop fans in the United States surprised many people by using their social media power to raise funds for Black Lives Matter and to sabotage a re-election rally for President Donald Trump.

But in Thailand they have been part of the youth culture for a long time, and their support for the protest movement reflects the frustrations of a generation that is unhappy with the government.

Young, mostly female, and social media-savvy, the profile of K-pop fans matches that of many protesters, said Chayanit Choedthammatorn, a Thai researcher of Korean studies.

The greatest spur to action was an Oct 16 crackdown when police used water cannon to disperse protesters who had defied a ban aimed at ending protests against Prime Minister Prayuth Chan-o-cha, a former army chief, and to demand curbs on the monarchy’s power.

Far from the scene, 23-year-old Areeya started a Twitter poll from her Girls’ Generation fanbase account with over 17,500 followers to see if they would help fund the cause.

Results were overwhelmingly positive, she said, as K-pop fans were no stranger to lightning fundraising campaigns to buy billboard ads in public spaces to celebrate their beloved artists’ birthdays or album releases.Meanwhile, Parliament speaker Chuan Leekpai said he had talked to former prime ministers about setting up a national reconciliation committee to resolve the political turmoil. 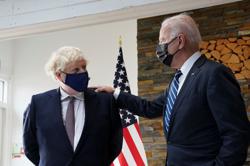