Young girls relaxing after a Sunday morning walk near a mural encouraging people to wear masks amidsts the Covid-19 pandemic in Surabaya on Oct 25, 2020. Indonesia are preparing for a long holiday weekend starting from Wednesday (Oct 28). - AFP

JAKARTA, Oct 25 (Xinhua): Indonesia was expected to see an exodus of homebound travellers who would be on a mass travel rush during a long holiday with fears that the Covid-19 infections would drag on in the country.

The Indonesian government has decided a mass leave on Oct 28-30, and Oct 31 and Nov 1 are weekends.

Chairman of the Indonesian People's Consultative Assembly Bambang Soesatyo called on the government and the Covid-19 Mitigation Task Force to anticipate possible increase in the number of Covid-19 cases during the long holiday.

The government also advised people who live in virus-prone zones stay at home if they have no urgent need to leave their houses, Soesatyo said.

He asked the central government to urge the heads of the regional administrations and tourist site operators to tightly implement health protocols.

In anticipation of overcrowded places where virus transmissions could happen, President Joko Widodo called on authorities to take measures to curb further surge of the Covid-19 cases during the long holiday.

"We have experienced a long holiday about 1.5 months ago (end of August), and after that the number of the COVID-19 cases was high," the president told a cabinet meeting on Monday.

Widodo hoped the surge in the Covid-19 cases during the August holiday should not recur.

Transportation Minister Budi Karya Sumadi predicted that Oct 28 when the mass leave begins would be the most crowded time, calling on travelers not to pack on that day to avoid possible Covid-19 transmissions.

In handling the crowds, the minister would coordinate with transportation operators to make sure that health protocols would be tightly applied by random checking from the places of embarkation to the destinations.

Transportation operators were also expected to increase the travel frequencies in an effort to avert crowds of people, said the minister who also suggested that passengers should always wear their face masks, delay eating and drinking as well as not speaking aboard public transports, especially aircraft.

Likewise, Sumadi required passengers using such public transports as trains, buses and aircraft to show certificates telling that they are non-reactive or test negative for Covid-19 after polymerase chain reaction (PCR) tests.

According to him, the requirement is key to containing the Covid-19 spread.

The minister said the government would set up check points in a number of border areas to check those who travel with private cars.

However, he said, enjoying the holiday at home is the best choice amid the lingering pandemic.

Meanwhile, the police have made efforts to tackle the homebound traffic during the long holiday as there would a significant increase in the volume of traveling cars.

Police spokesman Senior Commissioner Ahmad Ramadhan said the government would deploy a joint force of 94,170 policemen, 24,448 soldiers and 42,298 personnel from relevant institutions to break the chains of Covid-19 infections.

The police have drafted strategies, such as setting up a traffic contraflow system on the Trans-Java toll roads, limiting the number of trucks passing the turnpikes, and managing the traffic in rest areas, toll gates and inter-island ports, Ramadhan said.

The police would work at 645 integrated posts to secure toll roads, alternative routes, rest areas, tourist sites and inter-island ports during the long weekend, he added.

The joint task force also asked all tourist operators to allow only 50 percent of visitor capacities at tourist sites.

The travelers are also required to reduce family gatherings which are feared to create more Covid-19 clusters. 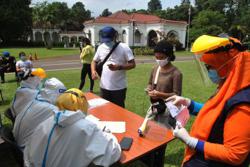