HONG KONG (AFP): Asian markets retreated Thursday (Oct 22) as the chances of a pre-election stimulus package from Washington dimmed, with Democrats and Republicans struggling to bridge their differences.

With the presidential vote less than two weeks away, investors are stepping back from putting any new bets on a deal despite recent optimism and Donald Trump's call for the two sides to hammer out a massive rescue package.

The deadlock comes as the need for help for struggling Americans is laid bare by a surge in new cases across the US that observers fear could hammer the world's top economy.

The White House has said it will agree to a US$1.9 trillion bill but that is $300 billion short of what Democrats have put forward, and even more than many congressional Republicans are willing to swallow.

"I don't think our chances get better after the election. I do think the next 24 to 48 hours will tell us a whole lot," White House chief of staff Mark Meadows said on Fox News.

But analysts do not expect anything to happen any time soon.

"We still think the recovery will proceed and in three to six months you're going to see that sequentially improving narrative and that's going to help earnings growth going forward."

Tokyo dropped 0.8 per cent, Hong Kong and Sydney each fell 0.7 per cent, while Shanghai shed more than one per cent.

Seoul, Singapore, Taipei, Manila, Jakarta and Wellington were also well in the red.

But while expectations of a deal are evaporating, traders remain broadly upbeat in the medium term as polls suggest Joe Biden and the Democrats could sweep the White House and both houses of Congress on Nov 3, which many feel could lead to an even bigger stimulus.

"The ebb and flow of the stimulus debate around a near-term package appears to matter less to investors as what is essential for market concerns is what different election outcomes mean for stimulus prospects in 2021," said Axi economist Stephen Innes.

The pound held up against the dollar after rallying Wednesday on news that Britain and the European Union will resume post-Brexit trade talks following a week of brinkmanship.

London had been refusing since Friday to restart negotiations after EU leaders said the previous day that it must compromise on outstanding issues including fishing rights.

Prime Minister Boris Johnson had signalled he is ready to abandon the process, which would be economically painful for both sides even without Covid's impact, but after talks between mediators, his office said there was now a basis to get back to the table.

Earlier, EU negotiator Michel Barnier told the European Parliament in Brussels that an agreement was "within our grasp". 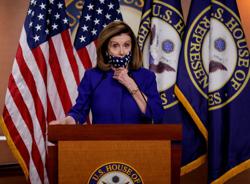