People wearing face masks to help protect against the spread of the coronavirus pass by a statue with a face mask at a park in Seoul, South Korea,on Oct 16, 2020. - AP

SEOUL (Xinhua): South Korea reported 91 more cases of Covid-19 as of midnight Tuesday local time compared to 24 hours ago, raising the total number of infections to 25,424.

The daily caseload stayed below 100 for the sixth consecutive day, but the double-digit expansion continued owing to small cluster infections in Seoul and its surrounding Gyeonggi province as well as imported cases.

Of the new cases, 13 were Seoul residents and 21 were people residing in Gyeonggi province.

Thirty-four were imported, lifting the combined figure to 3,584.

A total of 118 more patients were discharged from quarantine after making full recovery, pulling up the combined number to 23,584. The total recovery rate was 92.76 per cent. 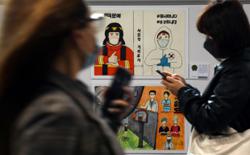