In this Sept. 9, 2020, file photo, an Indian army convoy moves on the Srinagar- Ladakh highway at Gagangeer, northeast of Srinagar, Indian-controlled Kashmir. - AP

SRINAGAR, Oct 19 (AFP): India said Monday that it had detained a Chinese soldier who strayed across the disputed frontier where the two countries are engaged in a months-long standoff after a series of clashes.

The People's Liberation Army corporal was "apprehended" in the high altitude freezing desert area of Ladakh after crossing into Indian-controlled territory along their poorly demarcated border, an Indian army statement said.

Both sides have poured tens of thousands of troops into the border zone since fighting a pitched battle in June in which 20 Indian troops and an unknown number of Chinese soldiers were killed.

India named the Chinese soldier who "strayed" as Corporal Wang Ya Long and said he had been given medical treatment against the extreme climate.

India said the PLA had already made an approach and the corporal would be returned "as per established protocols".

China did not immediately comment on the soldier’s apprehension.

The high-altitude standoff between the Asian giants began in early May with a fierce brawl, and exploded into hand-to-hand combat with clubs, stones and fists on June 15 that left 20 indian soldiers dead. China is believed to also have had casualties, but has not given any details.

The nuclear-armed rivals have accused each other of crossing into rival territory and of firing shots for the first time in 45 years.

The Indian army statement said the indian side had received an inquiry from China’s military "about the whereabouts of the missing soldier.”

The soldier "has been provided medical assistance including oxygen, food and warm clothes to protect him from the vagaries of extreme altitude and harsh climatic conditions,” the statement said.

Several rounds of talks have failed to significantly ease tensions and the neighbours -- who blame each other for the standoff -- are now digging in for a harsh winter at 4,200 metres (14,000 feet) in a region where temperatures regularly fall below minus 30 degrees Celsius (minus 22 Fahrenheit). - AFP
Article type: metered
User Type: anonymous web
User Status:
Campaign ID: 18
Cxense type: free
User access status: 3 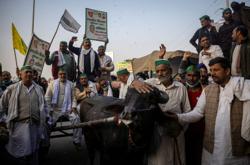