MANILA, Oct 16 (AFP): The Philippines has lifted a moratorium on oil and gas exploration in the disputed South China Sea, which the government said Friday could fast-track talks with Beijing on a joint energy project.

Drilling off the Philippines was halted in 2014 amid an escalating row with China over its rival claim to areas of the waterway that are believed to hold rich deposits of natural resources.

Philippine President Rodrigo Duterte, who took office in 2016, has softened his predecessors' opposition to Beijing's claims and in 2018 the two countries began talks to jointly explore the contested waters.

"Now that the moratorium is lifted, I'm sure that will expedite the discussions," Energy Secretary Alfonso Cusi told reporters Friday.

The decision to restart exploration and development activities had been "unilateral", Cusi said, but added Beijing had not been informed ahead of the government's decision.

China's embassy in Manila did not respond to a request for comment from AFP.

The lifting of the suspension also comes as the Philippines faces dwindling energy reserves.

Malampaya gas field, which supplies about 40 per cent of power to the archipelago's main island Luzon, is expected to run dry within a few years.

Beijing asserts sovereignty over almost all of the South China Sea, but in 2016 a UN-backed tribunal acting on a case brought by then-Philippine leader Benigno Aquino rejected its claims.

Local companies previously involved in three drilling projects off Palawan province in the western Philippines have been told to resume work, Cusi said.

One of the areas now permitted for exploration is Reed Bank, where Philippine energy companies operating prior to the 2014 moratorium had complained of harrassment from Chinese vessels. Cusi said the resumption of exploration activities in the region would also help boost the country's economy, which has been ravaged by the coronavirus pandemic.

Millions have lost work and around 350,000 people have been infected since the outbreak began.

"The lifting (of the suspension) will help prime up our economy," the energy minister said, adding it would "help in generating investments."

But despite government claims the move would facilitate cooperation with China, one analyst said it suggested the Philippines was increasingly willing to assert its sovereign rights over the area.

"It creates some leverage on our part to show that we're serious about exercising our own legitimate jurisdiction over these resources," said Jay Batongbacal, director of the University of the Philippines' Institute for Maritime Affairs and Law of the Sea.

Meanwhile, Reuters said the lifting also comes after Duterte made his strongest defence last month of a 2016 ruling by an international tribunal denying China's claims to the energy-rich waters, telling the UN General Assembly "we firmly reject attempts to undermine it".

China hoped it could work together with the Philippines in jointly developing energy projects in the South China Sea, foreign ministry spokesman Zhao Lijian said.

"China and the philippines have reached consensus on the joint development of oil and gas resources in the South China Sea and have established a cooperation mechanism for relevant consultations," Zhao Lijian told a daily briefing on Friday.

Cusi said there was no prohibition on ending the moratorium unilaterally and hoped it could expedite projects and help the philippines address energy security issues.

He expressed confidence that Philippine companies could proceed without any obstruction from China since "it follows that we can do our activity freely as the country that has economic rights" over the areas involved.

Cusi said three projects could now resume, including one by Forum Energy Ltd, a unit of PXP Energy Corp.

Forum has a 70% interest in Service Contract 72 covering gas exploration in the disputed Reed Bank. PXP has had talks with China National Offshore Oil Corp (CNOOC) about joint exploration and development there. 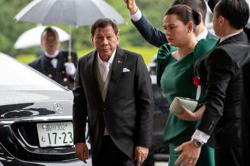 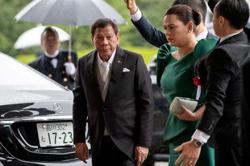