BANGKOK, Sept 22 (Reuters): Sex workers in Thailand have launched a petition calling for prostitution to be decriminalised and urging authorities to remove all penalties for selling sex.

Empower Foundation, a Chiang Mai-based group that supports sex workers, said it hoped to collect 10,000 signatures and present the petition to parliament to help persuade lawmakers to consider changing the country's prostitution law.

"The law punishes sex workers - 80% of whom are mothers and the main breadwinner for the whole family," said Mai Junta, a representative from Empower.

"It turns us into criminals," she told the Thomson Reuters Foundation on Tuesday.

More than 1,000 people had signed the petition since it was launched on Saturday.

Thailand is predominantly Buddhist and deeply conservative, but is home to an extensive sex industry, largely catering to Thai men.

Hordes of tourists also flock to the bright lights of go-go bars and massage parlours in the Thai capital Bangkok, and the country's main tourist towns.

Women and LGBT+ rights activists say the current law, which made prostitution illegal in 1960, does little to protect sex workers, while repeated arrests and fines for doing sex work has driven them further into poverty.

The women's affairs department at Thailand's Ministry of Social Development and Human Security said it was in the process of amending the prostitution law and would launch an online public hearing next year, without giving further details.

"We are aware of complaints regarding rights violations of sex workers due to this law... and we are not neglecting their suggestions (to repeal the law)," a spokesman said.

A 2014 report by the UN agency fighting AIDS estimated that there were 123,530 sex workers in Thailand but advocacy groups put the figure at more than twice that number and say it includes tens of thousands of migrants from neighbouring Myanmar, Laos, Cambodia and Vietnam.

Prostitution is currently punishable by a fine of up to 40,000 baht (US$1,274) or two years in prison, or both. People who pay for sex with underage workers can be jailed for up to six years.

More than 24,000 people were arrested, prosecuted and fined for sex work-related offences in Thailand last year, according to the Royal Thai Police.

Surang Janyam, director of the Service Workers in Group, a Thailand-based support organisation for sex workers, said the prostitution law should be repealed to allow sex workers to be protected under labour laws. 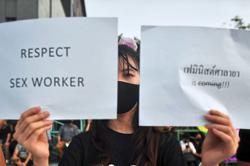 Sex workers: Prostitution not a crime