The guided-missile destroyer Hohhot (Hull 161) attached to a destroyer flotilla with the navy under the PLA Southern Theater Command steams in waters of the South China Sea during a maritime training exercise in Mid-July, 2019. Photo:China Military.

China knows its navy cannot match the US military but its People’s Liberation Army (PLA) should have the confidence to defeat the US should a conflict occur off the shores of China, says Global Times in its editorial on Sept 18.

The editorial emerged after US Defense Secretary Mark Esper remarked that China's navy is “no match” for that of the US in terms of strength, and that even if the US stopped building new ships, it would take China years "to match our capability on the high seas."

In the editorial, Global Times said:

“We very much agree with this assessment. There is indeed a wide gap in the naval capability of the Chinese and US navies. China is aware it cannot defeat the US navy in the event of a conflict in the South Pacific or the Indian Ocean.

“However, in China's adjacent waters, or the regions that concern China's core interests, the US navy is destined to gradually lose its dominance. The PLA should have the confidence to defeat the US military in these areas when a conflict occurs.”

Global Times, seen as a mouthpiece of the Communist Party of China and government, said Washington should not see China as a threat if it believes China’s navy is weaker.

The political news portal added that the US elites “are disturbed” by China's goal to complete the modernization of its national defense and armed forces by 2035, and to build a world-class military by 2049.

“Chinese society will support their government to boost China's above-mentioned capacity building with greater efforts, so that China won't be bullied by the US in our coastal waters, and to safeguard China's national security.”

The US was also urged to change its calculation formula when it comes to security. “The South China Sea and the Taiwan Straits cannot be treated by the US on par with the Caribbean Sea.

“If the US wants to subdue China in the latter's offshore waters, Washington must know it will be costly. In the long run, it is an unbearable weight on the US...When the country pursues goals way beyond its capabilities due to its greed, it will turn from being a real tiger to a paper tiger.” 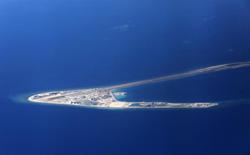