BANGKOK (The Nation/ANN): Police announced on Thursday (Aug 13) that autopsy results show Jaruchat Madthong – a key witness in Red Bull heir Vorayuth Yoovidhya’s hit-and-run case, had 218mg of alcohol in his blood and this was the cause of the accident that killed him.

Pol Lt-General Prachuap Wongsuk, chief of Provincial Police Region 5 said the autopsy had been done at Maharaj Nakorn Chiang Mai Hospital. He added that Jaruchat’s missing phone is also being tracked down by the investigating team.

Jaruchat was killed in an accident in Chiang Mai on July 30, just a day after Prime Minister Prayut Chan-o-cha set up a panel to review the Office of the Attorney General’s decision to drop charges against the member of a super-rich family.

People have been speculating that somebody may have wanted Jaruchat killed, especially since his testimony would have put Vorayuth in hot water.

Prachuap added that Jaruchat worked for the Chiang Mai magnate Chuchai Lertpongadisorn, who has already testified to the police. - The Nation/Asia News Network 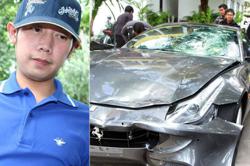