The agreement was signed at the Residence of France recently by Ambassador of the EU to Laos, Leo Faber and Director of AFD in Laos, Matthieu Bommier, with French Ambassador to Laos, Florence Jeanblanc-Risler in attendance.

Bommier remarked that “The protection of biodiversity is a priority for AFD, particularly in view of the COP15 meeting on biodiversity scheduled to take place in Kunming in early 2021”.

Further cooperation between the European Union, AFD, WCS and the Lao authorities was in the interests of people and the environment, he said.

Bommier explained that AFD has been financing a biodiversity protection project in the Nam Kading National Protected Area since the end of 2018.

In 2019, AFD and the EU decided to extend their support to new areas distinguished by the richness of their biodiversity - Nam Et-Phou Louey National Park and Xe Champhone Ramsar wetland.

The project’s objectives include implementing an integrated landscape approach with communities and public administrations, but also supporting communities and farmers in their empowerment through the development of biodiversity conservation enterprises and involving the private sector in mitigating the social and environmental impacts of major investments and infrastructure projects.

Work will be carried out in parallel with local and central authorities to feed into national policies and strengthen the governance of protected areas in Laos.

Laos was home to some world-class rainforests, with exceptional biodiversity, including hundreds of threatened species, making the country an evolutionary hotspot of diversity, Mr Leo Faber said.

Laos also boasts unique and globally significant biodiversity; the Greater Annamites has the highest concentration of endemic species for a continental area in the world and is ranked as one of the world’s 200 most important bioregions.

The establishment of Laos’ protected area system in the 1990s strongly represents the country’s unique biogeography.

The network of National Protected Areas covers roughly 15 percent of the country’s total land area. Despite this extensive network of protected areas, the country’s forest estate and biodiversity have been strongly affected by human activities. 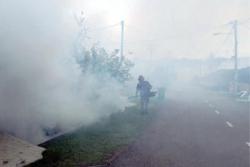