VIENTIANE, July 12 (Vientiane Times/ANN): Laos nationals returning home from overseas continue to be sent to the country’s quarantine centres for 14 days to ensure they comply with COVID-19 prevention measures.

Director General of the Department of Communicable Disease Control, under the Ministry of Health, Dr Lattanaxay Phetsouvanh told Vientiane Times that Laos returnees are continuing to enter the country every day and are being sent to quarantine centres and self-quarantine at hotels.

Most of those entering Laos are being sent to quarantine at the Km27 Military Training Centre in Vientiane, which is the biggest quarantine facility in the country.

“Many are Laos workers and students returning to their homes. More Lao workers are expected to enter the country because there are still many in foreign countries,” he said.

Deputy Director of the Health Department of Vientiane, Dr Naly Khanthalack, who is also head of quarantine at the Km27 Military Training Centre, said there were currently 380 people (including 209 women) isolating at the centre.

“80 per cent of them are Lao workers returning to their homes from Thailand as well as workers and students coming back from China, Malaysia, Vietnam and Korea,” she said.

Around another 100 Lao workers entering from Thailand would be sent to the quarantine centre today (July 9), she added.

As of 5 pm on July 7, a total of 1,979 people entered Laos through international border checkpoints and were checked for the virus, according to the Department of Communicable Disease Control.

Some 97 people touched down at Wattay International Airport made up of 55 Lao nationals, 30 Koreans and 12 from other countries.

Of Wednesday’s total, 1,366 people crossed the border from Thailand, and 456 were Lao workers returning to their homes.

Some 64 people crossed the Laos-China border (including 45 Chinese workers and 11 Lao workers), while 452 truck drivers including eight Lao students entered Laos from Vietnam.

At all border crossings, the temperature of each person entering was checked, and none showed signs of fever. All Lao workers returning to their homes and foreign workers were sent to quarantine centres for 14 days.

In another development, the Laos government also announced all travellers exiting the country will be required to produce medical certificates for their destination country to contain the spread of COovid-19.

The National Taskforce Committee for Covid-19 Prevention and Control has said that all travellers, including locals, must have a medical certificate before they visit another country. The committee said people who did not have a valid medical certificate would be denied entry at their destinations.

Deputy Director of the government-run Mittaphab Hospital (Friendship Hospital), Vangnakhone Dittaphong, underlined the significance of medical certificates for travellers. There will be multiple health check points and travellers will be required to produce medical documents from their country of origin.

People in Laos can request for a medical certificate at specific hospitals in the country. However, people with flu-like symptoms, cough, sore throat, or respiratory problems or have had a history of contact with a high-risk group will not be able to procure medical certificates, said the Laos official. - Vientiane Times/Asian News Network 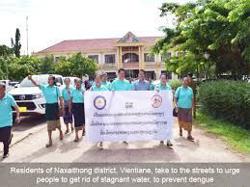