SINGAPORE June 30 (The Straits Times/ANN): This year's general election served up a few surprises on Nomination Day, with changes made to some parties' line-ups just before papers were submitted at nomination centres on Tuesday.

The ruling People's Action Party's slates for East Coast and West Coast GRCs were beefed up, with 4G ministers moving to strengthen the party's line-ups in these constituencies, where tough fights are expected.

Follow The Straits Times' live coverage in the campaigning leading up to Polling Day on July 10.

Heng, 59, who is first assistant secretary-general of the PAP, was spotted at St Anthony's Canossian Primary School, the nomination centre for East Coast GRC, Pasir Ris-Punggol GRC, Sengkang GRC and Punggol West SMC, at around 11.30am, half an hour before nominations closed.

East Coast GRC has been contested by the Workers' Party in the last three elections, and is widely seen as one of the toughest fights in this election.

Taking Heng's place in Tampines GRC is Senior Minister of State for Trade and Industry Koh Poh Koon, 48, who is an incumbent MP for Ang Mo Kio GRC.

The former air force brigadier-general, who is Singapore's first woman general, was previously tipped to be standing in Bishan-Toa Payoh GRC, where she had been seen walking the ground.

She will take on the Progress Singapore Party's Dr Ang Yong Guan, 65, a psychiatrist, who contested in the previous election under the Singaporeans First party.

Marymount SMC is a new constituency carved out of Bishan-Toa Payoh GRC, and has 23,444 voters.

He will face the PAP's Liang Eng Hwa, 56, who is an incumbent MP for neighbouring Holland-Bukit Timah GRC. Liang replaces Dr Teo Ho Pin, 60, who stood in Bukit Panjang for 14 years and is retiring.

Dr Tambyah, a medical professor at the National University of Singapore, was widely expected to anchor the SDP's Holland-Bukit Timah GRC before the switch.

SDP's Khung Wai Yeen, who contested Bukit Panjang SMC in 2015, had been walking the ground in Bukit Panjang as recently as Monday, but was moved to Marsiling-Yew Tee GRC instead.

Minister for Social and Family Development Desmond Lee, an incumbent MP for Jurong GRC, will be fielded in West Coast GRC, beefing up the PAP team that will face off against the Progress Singapore Party (PSP) team led by Dr Tan Cheng Bock, 80.

Dr Tan is heading what is considered PSP's "A team", which includes party assistant secretary-general Leong Mun Wai, 60, founder of a venture capital firm, and vice-chairman Hazel Poa, 50, a former secretary-general of the National Solidarity Party.

Lee Hsien Yang, a member of the PSP, met party candidates and members earlier on Tuesday but will not be contesting this election.

Nominations closed at noon, and his name did not appear in nomination papers.

In a Facebook post on Tuesday, Mr Lee said: "I have chosen not to stand for political office because I believe Singapore does not need another Lee."

He added that he is interested in politics, and is involved by speaking up and supporting candidates and parties he believes in.

He had been spotted at a coffee shop near Bendemeer Primary School nomination centre, which covered the Bishan-Toa Payoh, Jalan Besar and Tanjong Pagar GRCs, as well as Radin Mas SMC.

Lee, 62, has been on walkabouts with PSP members in Tanjong Pagar GRC and was unveiled as a PSP member last Wednesday. - The Straits Times/Asian News Network 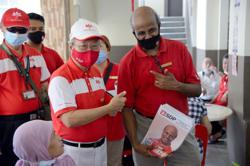